This October, Blu-ray is the warmest place to hide! 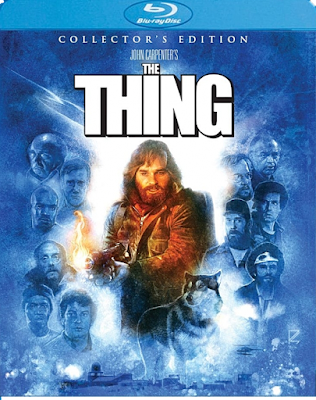 UPDATE: The original street date of September 20th has been pushed back until October 11th! Glaring audio issues were found in the main audio track, so all of us fans will have to wait just a bit longer to get the best possible release of this Carpenter classic!

THE THING is one of my all-time favorite films, so I'm ok with having to buy it again. (I've previously owned it on VHS, DVD, and currently own the Universal Blu-ray.) But now it's time to upgrade again to the last THING release (you and) I will ever need!

Film Synopsis: In the winter of 1982, a twelve-man research team at a remote Antarctic research station discovers an alien buried in the snow for over 100,000 years. Soon unfrozen, the form-changing alien wreaks havoc, creates terror and takes on the appearance of those it kills.

Paranoia strikes deep, and the stakes are high as the military personnel attempt to flush out the creature and kill it before it can assimilate them all. If they fail, "this Thing" could possibly make its way to civilization, where it could wipe out all of humanity in mere months!

Extras:
A new HD transfer?! A newly created 5.1 audio track?!! The Network TV Edit of the film?!?! And supposedly, there may be even MORE extras piled on before September draws near! Clearly this is the last release of this film any of us will ever need, so naturally you'll want to order your copy ASAP.

Shout! Factory did have a limited (to 1,500) edition up for pre-order on their site the other day, but that is currently gone! (All it came with was a second slipcover and an additional poster featuring alternate poster art, plus you would have gotten the disc three weeks early!)

However, all is not lost for you can still order the regular Collector's Edition directly from Shout! Factory, and get it two weeks early with an 18 x 24 poster of the new key artwork!

And for those of you who aren't in a rush to get your paws on this Blu-ray (HA!), you can always order a copy from AMAZON.COM!