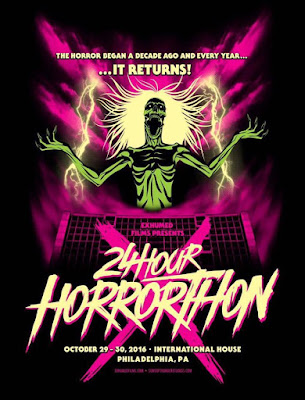 Hey Vault Dwellers! Yours truly is heading out for the weekend so there won't be any new content here or over at Vault HQ! I'll be partaking of Exhumed Films' 10th Annual 24-Hour Horrothon, which is my first visit to this highly-touted event!

Fourteen films are going to be screened at the International House in Philadelphia, all in 35mm. The catch? The audience has NO IDEA what is being shown. The only thing we're sure of, is that each film is a Horror flick hailing from the Decade of Decadence!

Prior to the movies, a sheet will be handed out with 14 vague descriptions of the day's features (a contest and yearly tradition) and after introductions, us lucky few (hundred) will try to survive a full 24 hours of 35mm films, trailers, and other fun stuff!

For any of you wondering, yes I will be posting updates about the show on social media, on Twitter, Facebook, and/or Instagram, at least while I'm awake, because this is an endurance run, and only the strong will survive!

Now if you'll excuse me, the open road is calling Vault Dwellers! Destiny beckons! It is time to test my mettle, and see if years of 12-hour film fests, and staying up super late on a daily basis is enough training to sit through 24 hours of awesome!

I hope you all have a Happy and safe Halloweekend my friends! Eat candy, go trick r' treating, watch Horror films and TV shows, hit up a party, and just revel in the coolest holiday of the year! While I'm away, head over to the main site and read dozens of Horror-themed articles from the archives, or listen in to one of our Vault-Cast Halloween episodes!

Also, if you are looking for anything to do this weekend:

Newt Wallen is running some awesome stuff at The Anthony Wayne Theater (in Wayne, PA), over the next few nights, including TALES FROM THE CRYPT, CREEPSHOW, and THE BRIDE OF FRANKENSTEIN.

The Mahoning Drive-In (in Lehighton, PA) is playing THE SHINING and MISERY tonight, then CRITTERS and both THE GATE movies tomorrow night.

Have fun gang! I'll see you all upon my return on Monday! HAPPY HALLOWEEN EVERYONE!