The Anthony Wayne Theater is screening a trio of Horror classics this Halloweekend!


For those of you in the Wayne, PA area and absolutely nothing to do this weekend, Newt Wallen's REEL CULT series has got you covered! This Friday - Sunday, see two of the best Horror anthologies ever made, plus a Universal classic! For a mere $7.00 you may enter the haunted halls of The Anthony Wayne Theater and take in digital screenings of these awesome fright flicks...

FRIDAY, OCTOBER 28TH @ 11:30 PM
TALES FROM THE CRYPT (1972)
This is the grand-daddy of all Horror anthologies and should not be missed! Five strangers meet The Crypt Keeper and witness their own deaths, in five brilliant vignettes! A woman gets a scary visit from Santa, an unfaithful husband has a ghastly vision of his future, a kindly Peter Cushing seeks vengeance from the grave, a woman discovers that she should be careful what she wishes for, and a cruel landlord is punished by the tenants of his poorly run home for the blind. TALES FROM THE CRYPT is a brilliant anthology film that balances the laughs and scares perfectly! Don't miss it!

SATURDAY, OCTOBER 29TH @ 11:30 PM
CREEPSHOW (1982)
This awesome anthology maintains the feel of pulp Horror magazines and comics, as it unspools in a series of tales involving zombies, monsters, "meteor shit," and killer cockroaches! Penned by Stephen King (who stars in one of the more lighthearted stories), directed by George A. Romero, with special makeup f/x by Tom Savini, and an awesome cast that includes Adrienne Barbeau, Leslie Nielsen, Hal Holbrook, Ted Danson, Ed Harris, and Tom Atkins, CREEPSHOW has all the makings of a true Horror classic!

SUNDAY, OCTOBER 30TH @ 8:00 PM
THE BRIDE OF FRANKENSTEIN (1935)
It turns out that Frankenstein's Monster was not destroyed by a mob of torch-wielding peasants in the original film, and is one lonely guy. That's why Victor Frankenstein teams up with another mad scientist (Dr. Pretorious, played by Ernest Thesinger) to create a mate for his invincible creation. Will it be love at first sight, or will The Monster experience heartbreak for the first time?! Watch this fantastic film to find out!

THE BRIDE OF FRANKENSTEIN was one of the first Horror sequels to ever be made, and features some truly iconic moments. It's super rare for it to be played in a theater in any format, so treat yourself this Halloweekend and see it!

There's a lot of other cool screenings coming up this year at The Anthony Wayne Theater! Check out the roster below and get excited because they'll be playing great midnight movies every month, featuring the likes of Ed Wood and Sonny Chiba! 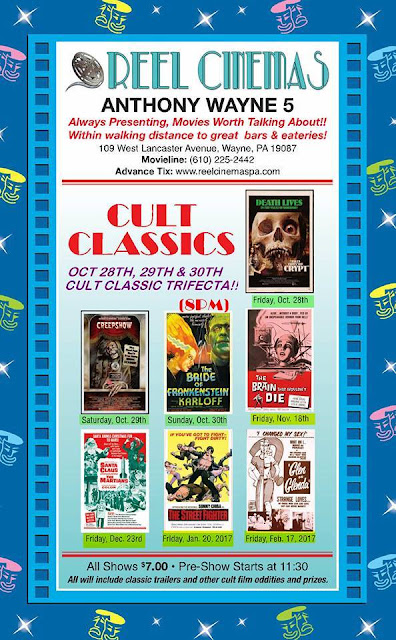 Posted by The Vault Master at 2:02 AM