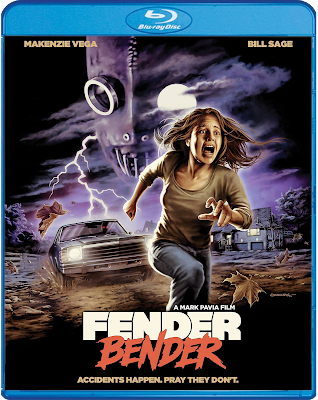 I caught this movie on Chiller TV a while back and was actually impressed. I totally this new slasher villain, and I hope FENDER BENDER is followed up with a sequel! Hell, make it a trilogy Scream Factory!

Film Synopsis: THERE ARE NO ACCIDENTS. He stalks the streets. Remorseless. Brutal. Bloodthirsty. When his prey is at its most vulnerable, he appears. And when night falls and all is quiet… he strikes. Prepare for the next driving force in horror… Fender Bender, "a scary, suspenseful slasher [that] keeps you on pins and needles throughout" (Bloodydisgusting.com)!

Seventeen-year-old Hilary has just received her driver's license… only to have her first accident shortly thereafter. Innocently exchanging her personal information with the remorseful stranger behind the wheel, Hilary returns home for a quiet evening with friends. But when the man she so readily handed all of her information to reveals himself to be something much darker and sinister than she could imagine, Hilary finds herself in a head-on collision with terror.

From writer/director Mark Pavia (Stephen King's THE NIGHT FLIER), FENDER BENDER is an intense crash-and-slash thriller that brings you back to a time when the boxes on the shelf at your local video store beckoned you with masked, knife-wielding maniacs and a twisted sense of morals.

Extras:
FENDER BENDER is another fine addition to the Scream Factory catalog, and will be available everywhere discs are sold on October 4th! You can order it now from AMAZON.COM, or get it directly from SHOUT! FACTORY, and get a FREE two-sided FENDER BENDER poster! (While supplies last!)