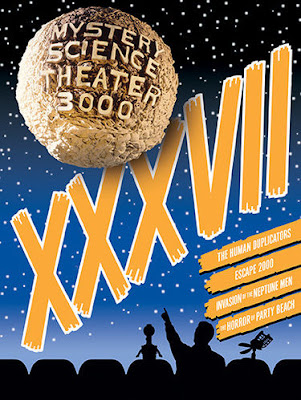 It's no secret that I am a huge fan of Mystery Science Theater 3000, and I have yet to miss out on any of the numerous boxed sets. (Including the OOP Rhino set that came with GODZILLA VS. MEGALON!)

Seriously, I could owe a loanshark fifty bucks, and I'd skip out on paying him and having my pinky finger broken,  just so I could sit and enjoy some quality time with Joel Hodgson, Mike Nelson, and their robotic companions! If you're as big a fan of this show as I am, then you won't want to miss out on Volume XXXVII!

EPISODES
402 - THE HUMAN DUPLICATORS: Aliens quietly invade Earth and implement the "Galaxy Domination Program," which involves replacing various scientists with android doubles. But things go wrong for the would-be conquerors when their android creations begin to defy them! Join Joel and the bots as they suffer through this movie, do invention exchanges, and dabble in some duplicating of their own!

705 - ESCAPE 2000: The "General Construction Corporation" sends teams of mercenaries into the Bronx to kick everyone out. Those that don't "Leave the Bronx" are promptly executed, whether they put up a fight or not. After his parents are killed by the evil corporation, the heroic "Trash" rallies the remaining gangs in the Bronx against Henry Silva and his army of mercs. Mike and the bots suffer though this heavily edited version of Enzo Castellari's post-apocalyptic sequel to 1990: THE BRONX WARRIORS after Crow nearly burns down the bridge of the SOL. Meanwhile, Clayton Forrester puts his mom in a "home," then tries to improve the SOL's ratings by briefly adding a new crewmember.

817 - THE HORROR OF PARTY BEACH: Barrels of chemical waste are dropped into the ocean, and turn a bunch of skeletal remains on the ocean floor into a legion of blood-sucking sea monsters! Amidst the battle to destroy the creatures, there's romance, music, and lots of dancing on the beach. When not riffing on this episode's film, Mike, Crow, and Servo attempt to do some "manly beach dancing" and sing a song about Sodium, while Pearl, "Brain Guy," and Bobo continue to fool ancient Romans into thinking they are gods.

819  - INVASION OF THE NEPTUNE MEN: Alien beings plan to conquer Earth, but they didn't count on PRINCE OF SPACE wannabee "Space Chief!" In his rocket-powered car, Space Chief takes the fight to the invaders on Earth's behalf, while being cheered-on by kids in short shorts. During this episode, Mike and the bots watch in horror as the "Nanobots" battle Mike's eyelash mites, Krankor visits the SOL, and Pearl and "Brain Guy" try to make Professor Bobo remember who he is.

Extras:
This newest MST3K set is available everywhere on November 22nd! You can order it right now at Amazon.com or Bullmoose.com (both have it relatively cheap) OR you can order it directly from Shout! Factory and get a limited (to 1,500) bonus disc featuring MST3K'S FANCY HOLLYWOOD AWARDS PREVIEW SPECIALS!

This exclusive disc comes with both the "Little Gold Statue Preview Special" from 1995, and the "Academy of Robots' Choice Awards Preview Special from 1998! And the only way to get it, is to ORDER IT HERE!

Also, while we're on the topic of MST3K, do not forget that on Thursday, November 24th, Shout! Factory TV will be running an all day MST3K Turkey Day marathon, hosted by Joel Hodgson, and new SOL captive Jonah Ray! Six episodes (chosen by fans) will run from 12 Noon EST until Midnight! Check out the trailer below!


Also, on November 22nd, Shout! Factory will also be having an MST3K TURKEY DAY SALE! There aren't any details yet, so be sure to CLICK HERE on Tuesday to see what kind of deals they'll have!