They're Not Staying on DVD Anymore.... C.H.U.D. Rises up on Blu-ray in late November! 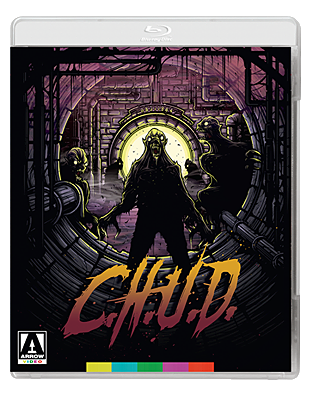 ON NOVEMBER 22ND, ARROW VIDEO DELIVERS A BLU-RAY/DVD COMBO OF C.H.U.D. THAT WILL BRING OUT THE CANNIBALISTIC MUTANT HOBO WITHIN YOU!

I've been a longtime fan of C.H.U.D. and have been hoping for some time that a major distribution label would give it some love on Blu-ray! And now it is time for me to retire my old Anchor Bay DVD, because Arrow Video has delivered the C.H.U.D. Blu-ray I've always dreamed of!

Film Synopsis: THEY'RE NOT STAYING DOWN THERE, ANYMORE! In downtown Manhattan, a police captain's hunt for his missing wife leads to the discovery of a series of mysterious disappearances in the area. Extending his search into the tunnels and sewers below the city streets, it soon becomes clear that something monstrous is lurking in that subterranean world - and it won't stay there much longer...

Starring John Heard (HOME ALONE) and Christopher Curry (STARSHIP TROOPERS) alongside an early appearance from John Goodman, C.H.U.D. has justifiably built up a huge cult following in the years since its release in 1984, with one of the most iconic creature designs of the period.

Extras:
Just to recap: We are getting two versions of C.H.U.D. (including a version I saw as a child, where the C.H.U.D.'s assault on a diner happens at the very end of the film) in high-definition, a slew of extras, and new cover art! What more could you possibly ask for?! Thank you so much Arrow Video - I'm super happy that you guys made the leap across the pond to bring us quality releases like this!

Arrow's Special Edition release of C.H.U.D. will be available everywhere on November 22nd, and can be purchased at AMAZON.COM, DIABOLIK DVD, and BULL MOOSE (which is currently offering the best price)! So order your copy now so that you can enjoy some Cannibalistic Humanoid Underground Dwelling after you ingest huge platefuls of turkey in another week and a half!