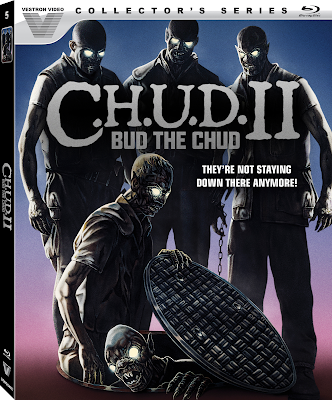 THIS C.H.U.D.'S FOR YOU! THE INFAMOUS SEQUEL IN NAME ONLY COMES TO BLU-RAY, COURTESY OF LIONSGATE'S VESTRON COLLECTOR'S SERIES LABEL!

I haven't seen C.H.U.D. II in so long, but recall it being more like a failed RETURN OF THE LIVING DEAD sequel than a C.H.U.D. followup. Still, it's a pretty fun little flick that unexpectedly got the royal treatment from Lionsgate.

While I'm not chomping at the bit to get it, I do plan on adding this title to my collection after the holidays, if only for the sake of nostalgia. (Unless I get it for Christmas, which would be super cool!)

Synopsis: Kevin, Steve, and Katie are an inseparable trio of friends doing some extracurricular snooping inthe school science lab when, among the test tubes and beakers, they discover a corpse! But before they can say 'Abra Cadaver,' the body disappears, rolling down Route 51 strapped to a gurney.

The kids need a spare stiff, and fast. What they find is 'Bud the Chud,' (Gerrit Graham) a half-dead decomposing humanoid, the result of a military experiment gone haywire. When Bud sets out on a killing spree, the kids, the Army, the police, and the FBI are hot on his trail, trying to save the entire town from becoming 'Chudified!'

Extras:
C.H.U.D. II: BUD THE CHUD is available wherever discs are sold on Tuesday, November 22nd! Currently it would seem that Diabolik DVD has the best price for it ($23.99) but you can also pick this disc up at Amazon.com or Bullmoose.com! So be sure to order this release right now Vault Dwellers, and while you wait for it to arrive, you can listen to the "Bud the Chud theme song" on a constant loop!