Shout Select unleashes Collector's Edition Blu-rays of GAME OF DEATH and RETURN OF THE DRAGON! GAME OF DEATH and RETURN OF THE DRAGON are my least favorite Bruce Lee flicks, but there's still plenty to love in each. Bruce's life or death struggle against Chuck Norris in Rome's Colosseum, and his face-off against long-limbed NBA star Kareem Abdul-Jabbar, are legendary! And now these sequences, and more, are all fully restored in 4K! Thanks Shout Select!

GAME OF DEATH Synopsis: Billy Lo (Bruce Lee) is a young kung fu star with a promising career. As the leader of a syndicate known for its exploitation of entertainers, Dr. Land (Dean Jagger) jumps at the chance to capitalize on Billy's status and that of his singer girlfriend (Coleen Camp).

Refusing to sign with Land, Billy's marital arts mastery is put to the test when he is brutally harassed by Land's men. In a stunning showdown, Billy must take on a group of martial arts masters in the final showdown. Tragically, Bruce Lee passed away during the production of the film. See this martial arts legend in his last role!

DISC TWO Extras:
GAME OF DEATH: COLLECTOR'S EDITION is now available at most retailers, and isn't too expensive, despite having two versions of the film and plethora of extras! Get it now from AMAZON, BULLMOOSE, DIABOLIK DVD, or directly from SHOUT! FACTORY! 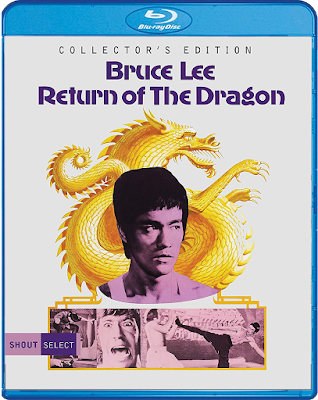 RETURN OF THE DRAGON Synopsis: Tang Lung (Lee) flies to Rome to help a friend of the family, Chen Ching-hua (Nora Miao). She is being threatened by local gangsters to sell her restaurant and they will stop at nothing to get the property. When Tang proves to be a threat to the syndicate's plans they hire the best martial artists to take out Tang Lung.

In one of the film's most famous sequences, Bruce Lee takes on American martial arts expert Colt (Chuck Norris) in the ancient city's majestic Colisseum. This martial arts classic, also known as WAY OF THE DRAGON, is written and directed by Bruce Lee.

RETURN OF THE DRAGON: COLLECTOR'S EDITION is reasonably priced (under $15 in most online shops) and available now! Get it at AMAZON, BULLMOOSE, DIABOLIK DVD, or SHOUT! FACTORY today!