Available May 16th: Walter Hill's STREETS OF FIRE gets the royal treatment from Shout Select! 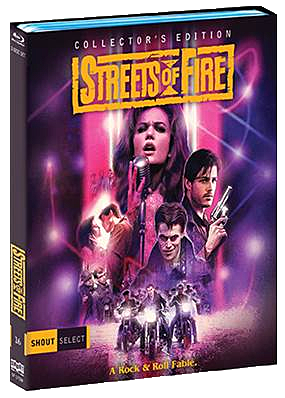 A friend of mine discovered STREETS OF FIRE about a decade ago and foisted it upon me. While I dug parts of it, overall I wasn't a huge fan. However, now that its gotten some major love from Shout Select, I'm ready to give this "Rock N' Roll Fable" another shot.

This cult favorite features a razor-sharp cast and original songs written by Jim Steinman, Stevie Nicks, Tom Petty and Ry Cooder and performed by The Blasters and The Fixx. Directed by cult filmmaker Walter Hill (THE WARRIORS, SOUTHERN COMFORT, 48 HRS.), STREETS OF FIRE is a rock & roll shotgun blast to the senses!

Extras:
Boasting a new 2K transfer, plus all the extras listed above, Shout Select's STREETS OF FIRE (COLLECTOR'S EDITION) is a must-own for fans of the film! You can order your copy today from AMAZON, BULLMOOSE, or DIABOLIK DVD. But if you order directly from SHOUT! FACTORY, you will also get a FREE 18x24 poster featuring this Blu-ray's new cover art!