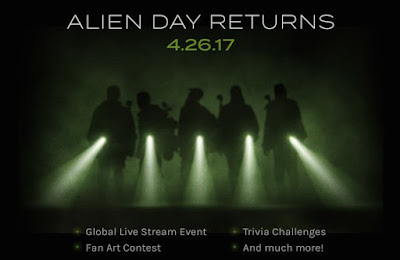 It's April 26th, and you know what that means Vault Dwellers! IT'S ALIEN DAY ONCE AGAIN!

To celebrate, 20th Century Fox is apparently doing a lot of cool stuff today, including a Live Stream Event featuring interviews with ALIEN: COVENANT cast & crew members, plus exclusive footage from the film. There are also plans for some trivia challenges, a fan art contest, special screenings of ALIEN & PROMETHEUS (check Fandango for theaters and showtimes), and more! For more details, head over to PopCultureHQ!

In honor of this relatively new Xenomorph fan-centric "holiday," we here at The B-Movie News Vault present to you a series of ALIEN-themed YouTube videos that will have you waxing nostalgic, and get you pumped for the upcoming ALIEN: CONVENANT (in theaters May 19th)!

TOY COMMERCIALS
"A-LI-ENS! SEND IN THE MARINES!" Man I loved hearing that phrase emanating from my TV's speakers back in the '90s! When the run of toys based on ALIENS came out, I was only nine years old, and well on my way to being a Sci-Fi and Horror junkie. My parents fed my addiction, and that's why I (at one time) had a ton of ALIEN action figures!

Oddly enough, I didn't have any of the human characters, but did have a good mix of Xenomorphs, including the Queen (which sadly fell apart after falling off a shelf), the water-spitting "gorilla" alien, and spiky green "mantis" alien! Scope out these cool commercials and wish you had these toys!


And here's a classic commercial for the ALIEN toy made by Kenner way back in the day!


ALIEN PARODIES
Sure the hive-mind swarms of Xenomorphs are supposed to be terrifying, but that hasn't stopped various comedic minds from poking fun at the acid-blooded space "bugs." Here's a collection of hilarious ALIEN parodies (and musicals!) that should elicit a few good chuckles.

ALIEN RIP-OFFS (TRAILER REEL!)
The most enduring legacy of ALIEN, and its sequels, is the seemingly endless army of rip-offs it has generated. Below is a playlist I created, of numerous films that said "screw it, we're gonna copy ALIEN and ALIENS, but at a fraction of the price!"


BONUS VIDEO: TEENAGE MUTANT NINJA TURTLES - THE CASE OF THE KILLER PIZZAS
The classic '80s Turtles cartoon series poked fun at numerous Horror and Sci-Fi characters during its ten season run. But in Season 2, Episode 6, the fearsome foursome tangled with monsters (hatched from meatball-like eggs) that look sort of familiar....