On April 11th, Get DEMENTED with Sallee Young! 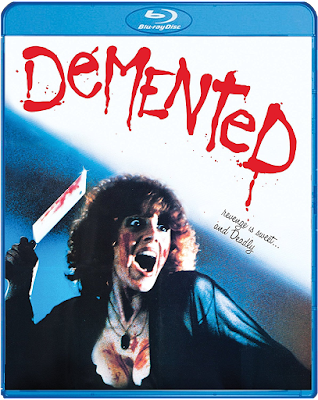 Synopsis: She has lost everything. Hope…control…and her mind!

After surviving a brutal and devastating assault, Linda Rodgers (Sallee Young) is institutionalized in order to deal with her intense trauma. By the time she is finally released, her attackers have been brought to justice and imprisoned…but the psychological scars remain.

Tormented by visions of her attackers, and mistreated by her philandering husband (Harry Reems!), Linda is pushed over the edge when she encounters four young men whom she confuses with the men who assaulted her. Consumed with madness, Linda attempts to enact a bloody retribution for the disgusting crimes committed upon her… and no one is safe in this shocking 1980 exploitation film in the tradition of I SPIT ON YOUR GRAVE!

Extras:
DEMENTED hits stores on Tuesday, April 11th, and is available to order at AMAZON, BULLMOOSE, DIABOLIK DVD, and SHOUT! FACTORY's online store! I am intrigued by this movie, and plan on picking it up later on this year. (Crossing my fingers for a Scream Factory sale this Summer or sometime in October!) Peep out the trailer and get excited Vault Dwellers!