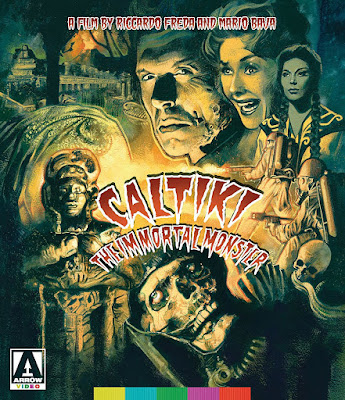 WHAT IS CALTIKI? FIND OUT FOR YOURSELF ON APRIL 25TH, WITH ARROW VIDEO'S SPECIAL EDITION RELEASE OF THIS SCI-FI CLASSIC!

It's been decades since I caught a late-night airing of CALTIKI on television. While I don't recall much about the film overall, I do have fond recollections about the movie's antagonist. A big thanks to Arrow Video for giving this film so much TLC. I can't wait to eventually add it to my collection!

Synopsis: A team of archaeologists led by Dr John Fielding (John Merivale, CIRCUS OF HORRORS) descends on the ruins of an ancient Mayan city to investigate the mysterious disappearance of its inhabitants. However, the luckless explorers get more than they bargained for when their investigation of a sacrificial pool awakens the monster that dwells beneath its waters – the fearsome and malevolent god Caltiki!

Though Riccardo Freda received sole directing credit, a significant portion of the film was in fact the work of Mario Bava, who also served as its cinematographer and was responsible its striking special effects. Drawing on a diverse array of influences, from THE QUATERMASS EXPERIMENT to the works of HP Lovecraft, CALTIKI: THE IMMORTAL MONSTER is a unique and unforgettable sci-fi chiller which showcases these two legendary filmmakers at their most inventive. Presented here for the first time in a newly restored high definition transfer, Caltiki shines – and terrifies! – like never before.

Extras:
Arrow Video once again delivers the goods, and hopefully finds an all new audience for this classic Italian Sci-Fi effort! This Special Edition release of CALTIKI will be available wherever discs are sold on Tuesday, April 25th! You can order it right now from AMAZON, BULLMOOSE, or DIABOLIK DVD!