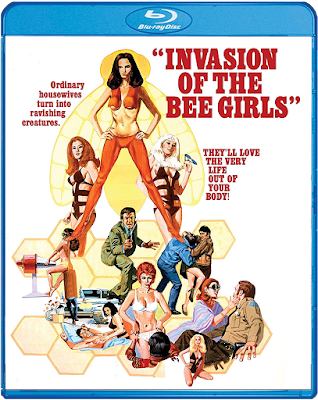 WITNESS THE "INVASION OF THE BEE GIRLS!" SEX-STARVED HYBRIDS SEDUCE AND KILL MEN IN THIS CLASSIC SOFTCORE SCI-FI CLASSIC FROM SCREAM FACTORY!

Synopsis: "INVASION OF THE BEE GIRLS is the best schlock soft-core science fiction movie since The Vengeance of She," claimed film critic Roger Ebert. And who wouldn't be terrified by the very thought of watching these lovely bee-hived beauties love their chosen mates to death?

A government inspector, that's who. And now he alone must stop their lust for killing, before he becomes one of the Queen Bee's honeys! This bee-witching tale stars a pair of bee-uties: Anitra Ford (THE BIG BIRD CAGE) and Victoria Vetri (WHEN DINOSAURS RULED THE EARTH).

INVASION OF THE BEE GIRLS is now available on DVD & Blu-ray from those magnificent folks at Scream Factory! Though light on extras, I'm excited to own this movie because of the new HD transfer! If you haven't seen it yet, then check out the trailer below before you order this title from AMAZON, BULLMOOSE, DIABOLIK DVD, or directly from SHOUT! FACTORY.