See Sonny Chiba as a crimefighting lycanthrope in WOLF GUY! Available on Special Edition Blu-ray on May 23rd! 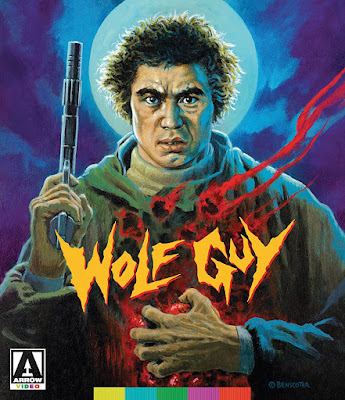 ON MAY 23RD, SONNY CHIBA UNLEASHES HIS LYCANTHROPE RAGE IN STUNNING HD, COURTESY OF ARROW VIDEO!

I have known about the existence of WOLF GUY for some time now, but have been unable to procure a decent copy of it.... until now! Thanks to those magnificent folks at Arrow Video, WOLF GUY will finally be making its international debut! As a devout lover of all things Sonny Chiba, I simply must add this film to my personal collection!

Synopsis: Shinichi ‘Sonny’ Chiba is a martial arts ‘manimal’ in the ultra-70’s, 100% bizarre mixture of horror, action and sci-fi that is WOLF G UY, one of the rarest and most sought-after cult films produced by Japan’s Toei Studio. Based on a manga by Kazumasa Hirai (creator of 8 MAN), and never before released outside of Japan, it’s a genre film classic waiting to be discovered and a completely unclassifiable trip into phantasmagoric funk.

Chiba stars as Akira Inugami, the only survivor of a clan of ancient werewolves who relies on his supernatural powers to solve mysterious crimes. After a series of bloody killings perpetrated by an unseen force, Inugami uncovers a conspiracy involving a murdered cabaret singer, corrupt politicians, and a plot by the J-CIA to harvest his blood in order to steal his lycanthropic powers! At the same time, Inugami also discovers the truth behind his family heritage, and that he may not be the last of his kind.

Extras:
Initially planned for release on April 25th, WOLF GUY will now be available on Tuesday, May 23rd! Order your copy of this never-before-seen (outside of Japan) Action/Horror mash-up featuring the legendary Sonny Chiba now, from AMAZON, BULLMOOSE, DIABOLIK DVD, or directly from ARROW VIDEO!