This November, Umbrella Entertainment's got another great round of titles coming to DVD & Blu-ray! Based upon Michael Crichton's novel, THE ANDROMEDA STRAIN has humanity facing extinction when a virus from outer space makes landfall on Earth, CANNONBALL RUN II's crazy cast of characters race from coast to coast to win a huge cash prize, ATTACK FORCE Z's all-star cast (Mel Gibson, Sam Neill, John Philip Law, and... John Waters?!) goes on a rescue mission during the Pacific Theater in WWII, and HUNTING HUMANS is a new film where a rural desert town's residents literally hunt humans for sport! For full specs & extras on these titles, scroll down! 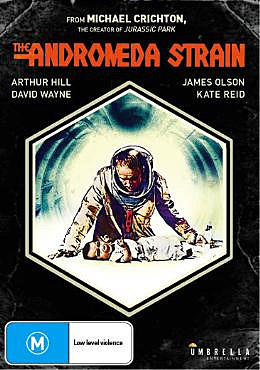 Synopsis: Directed with clinical precision by Academy Award(R) winner Robert Wise, THE ANDROMEDA STRAIN is a compelling account of the earth's first biological crisis. After an errant satellite crashes to earth near a remote New Mexico village, the recovery team discovers that everyone in the town are victims of a horrible death, with the mysterious exception of an infant and an old homeless man.

The survivors are brought to a state-of-the-art underground laboratory, where the puzzled scientists race against time to determine the nature of the deadly alien virus before it wreaks havoc. A trailblazer in the areas of special effects and inventive sets, THE ANDROMEDA STRAIN is based on Michael Crichton's best-selling novel that created national paranoia for it's topical relevance to the first moon landing and is perhaps the most chillingly realistic science fiction thriller ever made. 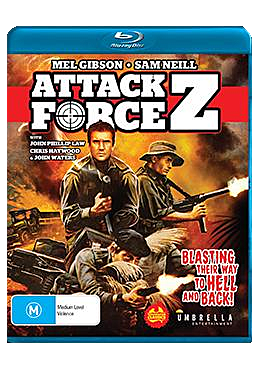 ATTACK FORCE Z (1982)
Synopsis: Mel Gibson commands an elite military team dispatched during WW II to locate and rescue the survivors of a shot down plane, stranded on a South Pacific island occupied by the Japanese. One of the castaways, a defecting Japanese official, holds the secret to ending the war, and must be saved at all costs. 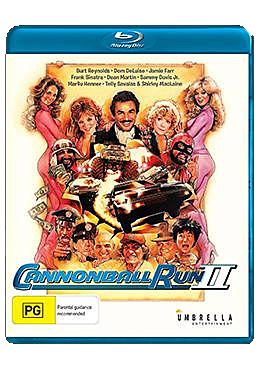 Synopsis: When a wealthy sheikh (Jamie Farr, M.A.S.H.) puts up $1 million in prize money for a cross-country car race, there is one person crazy enough to hit the road hard with wheels spinning fast. Legendary driver J.J. McClure (Burt Reynolds, THE LONGEST YARD) enters the competition along with his friend Victor (Dom DeLuise, BLAZING SADDLES) and together they set off across the American landscape in a madcap action-adventure destined to test their wits and automobile skills. 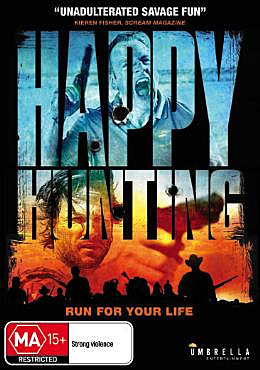 Synopsis: Winner of best film at the Fantastic Cinema Festival! Directed by Louie Gibson, son of acclaimed actor and director, Mel Gibson! HAPPY HUNTING follows Warren, a degenerate drifter, suffering from debilitating alcohol withdrawals on a daily basis. On his way down to Mexico, he becomes stranded in Bedford Flats, a one-horse town nestled deep in the American desert.

It was a once-prosperous hunting community that has been reduced to an impoverished dust bowl. Unfortunately for Warren, it turns out that the town’s pastime is rounding up drifters and hunting them as part of an elaborate sporting event. To make matters worse, he’ll go into alcoholic withdrawal unless he finds a way to stay loaded. It all builds to a blood-soaked, live-or-die showdown deep in the desert.

Extras:
CLICK HERE to get your copy of HAPPY HUNTING from Umbrella Entertainment! Synopsis: Widely considered to be the most shocking and hallucinatory horror movie in history - and described by Argento as "an escalating experimental nightmare," SUSPIRIA stars Jessica Harper as a young American ballet student who arrives at a prestigious European dance academy and is confronted by a series of bizarre and horrific deaths.

Extras:
As mentioned earlier, Umbrella's 40th Anniversary Edition of SUSPIRIA has been pushed back until the end of November. But don't let that stop you from ordering yourself a copy! CLICK HERE to place your order now!

Posted by The Vault Master at 2:19 AM