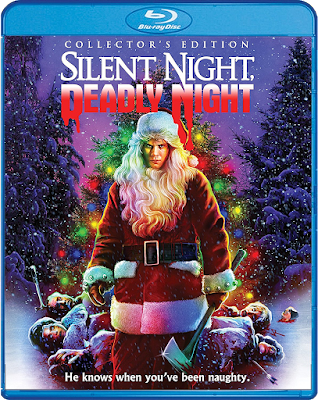 SILENT NIGHT, DEADLY NIGHT is a mean-spirited little slasher flick that many of us have grown to love over the years. Initially pulled from theaters due to protests from angry parents, the film found an audience on home video, and built up a healthy cult following!

And though it has been released on DVD (and Blu-ray) by Anchor Bay in the past, this new release from Scream Factory looks to be the last copy of this film that any of us will ever have to buy!

Oh man, I hope this is under my tree this Christmas! That would be KILLER!

Synopsis: Community leaders tried to stop the release. The P.T.A. fought to ban it. Now one of the most controversial slasher films of all time is back in a new high-definition release! This new edition of the horror holiday favorite has been restored from the original vaulted film negative.

SILENT NIGHT, DEADLY NIGHT is the heartwarming story of little Billy Chapman who was traumatized by his parents' Christmas Eve murder, then brutalized by sadistic orphanage nuns. But when grown-up Billy is to dress as jolly St. Nick, he goes on a yuletide rampage to "punish the naughty!" Santa Claus is coming to town ... and this time he's got an axe! Robert Brian Wilson and Scream Queen Linnea Quigley star in this jaw-dropping horror classic that a nation of angry mothers still cannot stop!

Extras:
New cover art! Lots of new extras! An all new HD transfer of both cuts of the film! Could you ask for anything more? Well.... YES! Also coming out on December 5th (while supplies last), Scream Factory is also releasing a LIMITED EDITION release of this cult classic! (Only 2,000 copies available!) Not only will it come with an exclusive 18x24 rolled poster featuring Joel Robinson's new cover art, but it will also have a limited edition 8-inch Billy action figure from NECA! And holy cow, does this figure capture the likeness of Robert Brian Wilson perfectly! Take a look for yourself below!


Once again, both editions of Scream Factory's SILENT NIGHT, DEADLY NIGHT are available on Tuesday, December 5th! You can order the standard Collector's Edition now at AMAZON, BULLMOOSE, DIABOLIK DVD, or from SHOUT! FACTORY (which will net you a poster and early delivery of your 2-disc Blu-ray).

However, the Limited Edition is only available directly from SHOUT! FACTORY's website! On the plus side though, shipping is FREE and you will receive your items a full week early! Either way, get this release pre-ordered gang because it is going to be incredible!