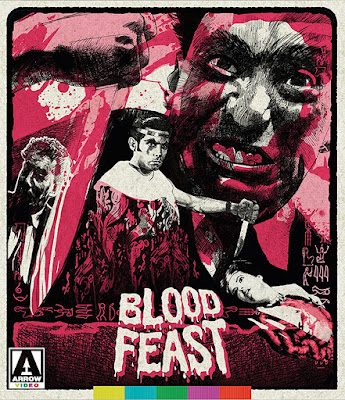 Though I have seen BLOOD FEAST in 35mm, and briefly met and shook hands with the late H.G. Lewis, I have to admit that I'm not a huge fan of this film. That being said, I cannot deny that BLOOD FEAST served as a very important part of Horror film history, as it is the great grandaddy of splatter cinema! Arrow's release boasts an HD transfer of the film, plus a wealth of extra features. This is such a great-looking release, that even I wouldn't mind adding it to my collection!

Synopsis: The filmography of late movie maverick Herschell Gordon Lewis brims with the mad, macabre, and just downright bizarre. But perhaps the most unhinged of all his directorial efforts, and certainly the most influential, must surely be his original gore-fest BLOOD FEAST, the first ever splatter movie!

Dorothy Fremont is looking to throw a party unlike any other, and she gets just that when she hires the decidedly sinister Fuad Ramses to cater the event. Promising to provide her guests with an authentic Egyptian feast, Ramses promptly sets about acquiring the necessary ingredients the body parts of nubile young women!

Featuring a host of stomach-churning gore gags including the infamous tongue sequence and much more nastiness besides, Herschell Gordon Lewis' BLOOD FEAST more than lives up to its name and remains essential viewing for any self-respecting splatter fan.

Extras:
Yowza! They really went all out for this release! Arrow Video's 2-Disc Special Edition of BLOOD FEAST will be available on Tuesday, October 24th! Order your copy today from AMAZON, BULLMOOSE, or DIABOLIK DVD!