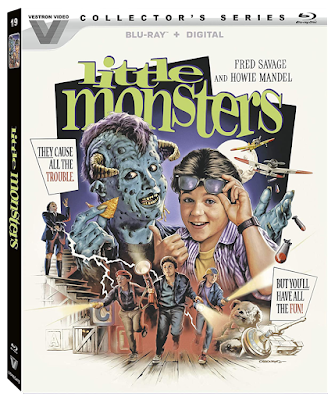 Rejoice for Lionsgate's Vestron label is back with two really solid titles! LITTLE MONSTERS has been a favorite of mine since I was a kid - I've always felt that it was a spiritual successor to NIGHTBREED. And speaking of David Cronenberg.... SHIVERS is the other new Vestron release this week! I've never seen it (I plan on rectifying that this weekend) but I'm definitely looking forward to this early body-horror tale that sounds like a mixture of NIGHT OF THE CREEPS and RABID! Both new Blu-ray releases come with a variety of new special features (including audio commentaries and cast & crew interviews) and are remarkably cheap - you'd be a fool not to add them to your collections ASAP Vault Dwellers!

Synopsis: Brian (Fred Savage - THE PRINCESS BRIDE, THE WIZARD) isn't scared of the monster living under the bed. On the contrary, when he gets to know the wild-eyed boogeyman, Maurice (Howie Mandel - WALK LIKE A MAN, voice of Gizmo in GREMLINS), the pair become fast friends. During the night, Maurice takes his young charge into the netherworld of monsters, where they have a great time making mischief in the lives of sleeping children. But Brian's opinion of Maurice and his freewheeling lifestyle changes when he discovers that he himself is turning into a monster.

Extras:
LITTLE MONSTERS is now available on Blu-ray and is shockingly cheap: The introductory price is between $13 - $15! That amazes me because of all the new extras included with this release, and also because all of the previous Vestron titles were in the $20 - $25 range! So relieve this (somewhat traumatic) late 80s children's classic today and get yourself a copy from AMAZON, BULL MOOSE, or DIABOLIK DVD! 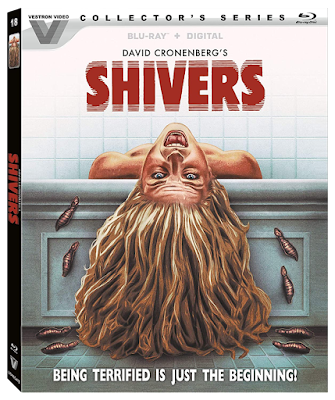 Synopsis: After a scientist living in a posh apartment complex slaughters a teen girl and kills himself, investigators discover that the murderer had been carrying on experiments involving deadly parasites. Roger St. Luc (Paul Hampton - WOMEN OF THE PREHISTORIC PLANET, HIT!), a doctor living in the building, and his aide, Nurse Forsythe (Lynn Lowry - THE CRAZIES, THE CAT PEOPLE), then realize that the parasites are on the loose, attacking fellow tenants. And those who become hosts turn into erotically obsessed maniacs who pass the bugs on through violent sex.

Extras:
The Vestron Blu-ray release of SHIVERS is also currently available wherever Blu-ray discs are sold and goes for between $13 - $15! Again, this price point is mind-blowing considering previous Vestron title pricing, plus the number of new extras created for this release - I really hope this is a continuing trend! Get your copy of SHIVERS now from AMAZON, BULL MOOSE, or DIABOLIK DVD!