The Battle For the Future Has Begun: DEF-CON 4 is Now Available on Blu-ray! 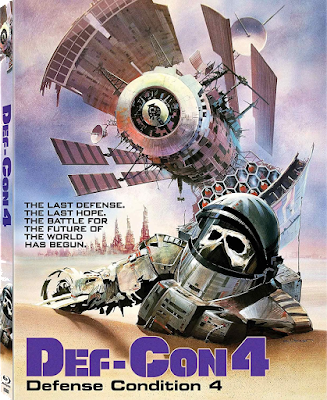 DEF-CON 4 doesn't seem to get mentioned much these days, and yet this film's theatrical one-sheet is easily one of the most memorable, and iconic pieces of art from the long-lost VHS rental era. I never got around to watching this movie back in the day (though I definitely perused the VHS sleeve numerous times in my youth) so I'm excited to see it finally get a Blu-ray release here in the U.S.! (Prior to this disc, it was released by Arrow Video in a Region B-locked release.) The film has been newly remastered in high-definition, contains a handful of special features, reversible cover art, and comes packaged in a collectible slipcover, which should excite some of you collectors! To get the full details of this new release, read onward!

Synopsis: Three astronauts, Tim Choate (THE FIRST TIME, GHOST STORY), Kate Lynch (MEATBALLS), John Walsch (BODY PARTS), in a secret spaceship lose all contact with the ground and observe what appears to be a nuclear exchange between the USA and Russia! Two months later, the spacecraft’s guidance system is mysteriously reprogrammed, forcing the crew’s return to a vastly changed Earth, where they encounter crazed cannibals, paranoid survivalists, and a sadistic despotic ruler! Hang on tight, DEF-CON 4 is a sci-fi survival thriller that will leave you breathless!

Extras:
Scorpion Releasing's new Blu of DEF-CON 4 is now readily available to own and should cost you somewhere between $18 - $23! If you're a post-apoc sci-fi junkie, you may just want to add this one to your personal collection Vault Dwellers - Get a copy of DEF-CON 4 today from AMAZON, BULL MOOSE, DIABOLIK DVD, or directly from KINO LORBER!