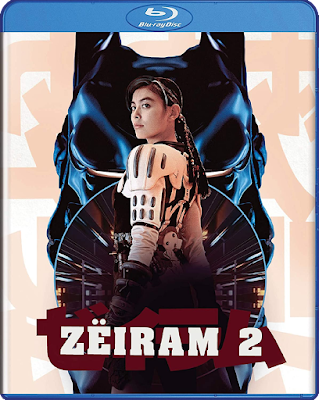 THE SEQUEL TO KEITA AMEMIYA'S "ZEIRAM" IS NOW AVAILABLE ON BLU-RAY DISC FOR THE FIRST TIME EVER!
Acting as a followup to IRIA: Zeiram the Animation, ZEIRAM was a fairly decent live-action Japanese sci-fi flick that relied heavily on practical effects. The sequel (which I used to have on a bootleg VHS tape) upped the ante a bit, and to my knowledge, has never received a legit DVD release here in the States.

So imagine my surprise when I discovered that ZEIRAM 2 arrived on Blu-ray disc this past Tuesday through Media Blasters' Tokyo Shock label! This new disc contains both English & Japanese audio options and offers up a handful of special features, all at a relatively low price! Now if they'd just release the original ZEIRAM to Blu-ray, I'd be all set!

Synopsis: Upon successfully completing another important mission, the beautiful alien bounty hunter Iria returns to Earth. Along with her computer, Bob, and her assistant, Fujicrow, she is assigned a new android partner. Unfortunately, residing inside the android is the most cunning and evil combat life form known in the universe- a vicious Zeiram unit! When the android is damaged during combat, Zeiram emerges from hiding and begins to terrorize Iria and her comrades and soon becomes a serious planetary threat that must be stopped at all costs!

ZEIRAM 2 is now available wherever Blu-ray discs are sold and should only cost between $14 - $16! Add this oddball Japanese sci-fi actioner to your collection today - order yourself a copy from AMAZON or BULL MOOSE!

Posted by The Vault Master at 2:29 AM