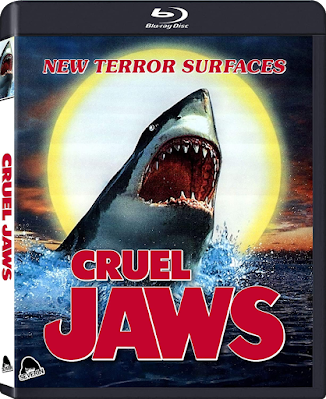 SEVERIN FILMS GIVES US EXPLOITATION FILM FANS CANNIBALS, KILLER SHARKS, AND A DOSE OF LUCIO FULCI ON BLU-RAY DISC!
Before I dig into this haul of new Severin titles, I just want to say that yes I do in fact realize that these films have been available to order direct from Severin for some time. In fact, my copy of CRUEL JAWS will be arriving in just a few days! But for those of you who don't care about special packages and/or exclusive slipcovers, now is the time to add some new Severin titles to your growing collections! For lovers of cannibal cinema, you can choose from the parody-level flesh-eating of MASSACRE IN DINOSAUR VALLEY, or PRIMITIVES, the Indonesian bargain-basement version of CANNIBAL HOLOCAUST! And for you natural horror/killer shark enthusiasts, you will swoon over Bruno Mattei's creatively bankrupt rip-off, JAWS 5.... err... I mean CRUEL JAWS! If any of that cinematic madness caught your attention, then scroll down to get the full details of these four upcoming Severin releases!

Synopsis: He defied all laws of good taste and international copyright with SHOCKING DARK and ROBOWAR. He reset the bar for batsh*t crazy ItaloHorror with RATS: NIGHT OF TERROR and HELL OF THE LIVING DEAD. And in 1995, legendary director Bruno Mattei – here as ‘William Snyder’ – stunned the civilized world with this ultimate sharksploitation saga that liberally borrows characters, plot and footage from Joe D’Amato’s DEEP BLOOD and Enzo G. Castellari’s THE LAST SHARK (and that’s just the tip of a very litigious fin). Filmed in South Florida with a cast of now-ashamed unknowns that includes a Hulk Hogan lookalike, experience “the epitome of outrageous thievery cinema” (All Movie) – actually released in some countries as JAWS 5 – now remastered uncut in HD for the first time ever!

I'm still in disbelief that this movie got a legit Region A Blu-ray release Vault Dwellers! Scream Factory as going to put this film out years ago on a double feature disc, but they abandoned it due to a whole chain of legalities (because this film includes most of the shark footage from THE LAST SHARK - which is still banned from U.S. shores - and even a few snippets from JAWS!). Now for the first time ever, CRUEL JAWS can be yours! The disc should cost between $20 - $29 and can be ordered through AMAZON, BULL MOOSE, DIABOLIK DVD, or directly through SEVERIN FILMS' site! 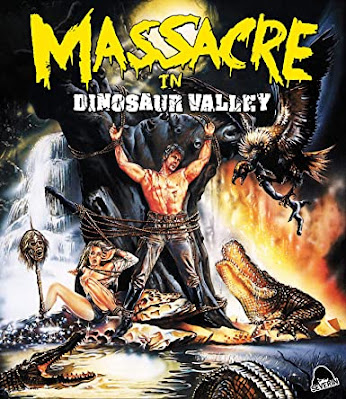 Synopsis: It’s been called “top-notch entertainment” (Rock! Shock! Pop!), “a rip-roaring riot of Italian exploitation” (DVD Beaver) and “a weird cross between ROMANCING THE STONE and CANNIBAL FEROX” (The Video Graveyard). Now experience the wildest ‘80s cannibal movie you’ve never seen scanned uncut in 4k from the original negative: Michael Sopkiw (BLASTFIGHTER, KILLER FISH) stars as a cocky paleontologist who crash-lands into a jungle hell chock full of fashion models, graphic violence, rampant nudity, and tasty gobs of flesh-chomping mayhem. Marta Anderson (BARE BEHIND BARS) co-stars in this ”fromaggio gem from another era” (Bloody Good Horror) – also released as AMAZONAS and CANNIBAL FEROX II – co-written by the legendary Dardano Sacchetti (THE BEYOND, DEMONS) that B&S About Movies says “delivers on everything it promises, except dinosaurs.”

Extras:
Severin's Blu-ray release of Michele Massimo Tarantini's MASSACRE IN DINOSAUR VALLEY is now available and should cost between $20 - $29! Order it today from AMAZON, BULL MOOSE, DIABOLIK DVD, or directly from SEVERIN FILMS! Speaking of Severin, they still have some copies of this title with a limited edition slipcover available on their site as well! 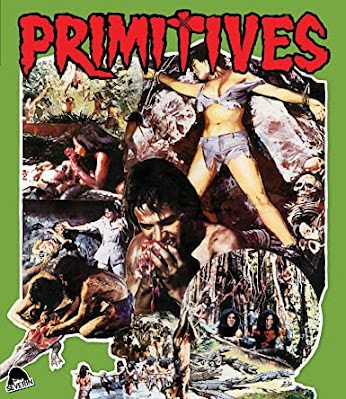 Extras:
Severin's Blu-ray of PRIMITIVES is currently available and should cost between $20 - $29! Get your copy of this forgotten Indonesian cannibal gem now from AMAZON, BULL MOOSE, DIABOLIK DVD, or directly from SEVERIN FILMS! If you want this one with the exclusive limited edition slipcover, you can pick that up HERE.

Posted by The Vault Master at 1:21 PM