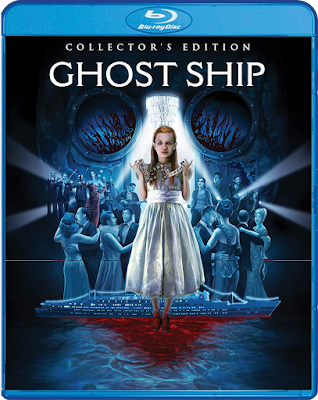 "SEA EVIL" WITH SCREAM FACTORY'S NEW BLU-RAY RELEASE OF THE 2002 DARK CASTLE  FRIGHT FLICK!
I vaguely recall the days of my youth when Dark Castle Entertainment first came on the scene with their fairly decent remake of HOUSE ON HAUNTED HILL. It had a great cast and atmosphere but I felt that they totally botched the climax. Then came THIR13EN GHOSTS, another fairly solid remake of a William Castle classic, which was shortly followed by GHOST SHIP, an original feature film that has one of the most memorable opening sequences you'll see in just about any horror movie. The only thing is.... that's all I truly do remember about this tale of a haunted derelict vessel being found by a salvage team at sea. And what better way to revisit this film than with Scream Factory's new Collector's Edition release, that comes with a new director's commentary, multiple new cast & crew interviews, and a multitude of archival making of featurettes!

Synopsis: Finders keepers. Any abandoned ship floating in international waters can be claimed and towed to port by whomever is fortunate enough to find it. Or, in the case of one team of salvage experts, unfortunate enough.

In this stylish, effects-packed chiller from Dark Castle Entertainment, salvagers trained for any situation imaginable come face to horrifying face with the unimaginable after boarding a derelict luxury liner. Julianna Margulies, Gabriel Byrne, Ron Eldard and Isaiah Washington are among the hands on deck who'll confront a seafaring collector of souls. Steve Beck (THIR13EN GHOSTS) directs this frightful chiller!

Scream Factory's Collector's Edition Blu-ray of GHOST SHIP is now available wherever Blu-rays are sold, and should cost between $25 - $29! Order a copy of this Dark Castle classic today from AMAZON, BULL MOOSE, DIABOLIK DVD, or directly from SHOUT! FACTORY, which will net you an exclusive 18 x 24 poster featuring their newly created artwork. (While supplies last!)

Posted by The Vault Master at 1:22 AM