A Cut Above the Rest - TERROR IN THE AISLES is Now on Blu-ray Disc! 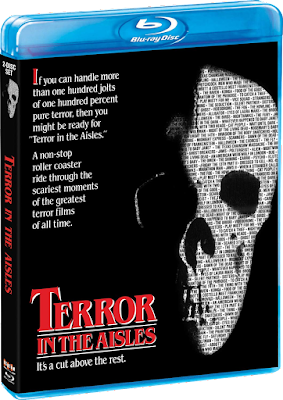 SCREAM FACTORY'S LATEST BLU-RAY TITLE IS A BLAST FROM THE PAST AND SHOULD BE A REAL TREAT FOR HORROR FANS!

Back during that wonderful period of my life where I was young and carefree, and made frequent trips to the nearby mom & pop video store (Electric City Video.... how I miss thee), I recall seeing the VHS cover for TERROR IN THE AISLES hiding in the Horror section. It was always one of those tapes I'd pick up and look at repeatedly, but never get around to renting. When I finally did get to sit down and watch this (mostly) 80s Horror doc it was during the death knell of both VHS and the video rental business when I bought a copy for just a few bucks.

But I eventually got rid of my large collection of tapes in order to upgrade to DVD (and eventually Blu-ray) and I wouldn't see TERROR IN THE AISLES again until Universal included it as a throwaway extra on their HALLOWEEN II Blu-ray. But now it looks like it could be time to upgrade again with Scream Factory's new release of this curiosity. Along with new cast & crew interviews, there will be a new audio commentary, trailers and TV spots, and the rare longer TV edit! For the full details of this 2-disc set and where you can obtain a copy, read onward Vault Dwellers!


Synopsis: SOME OF THE SCARIEST MOMENTS IN FILM HISTORY IN ONE TERRIFYING FILM! TERROR IN THE AISLES is a roller coaster ride through the most terrifying moments from over 70 of Hollywood's greatest chillers. Donald Pleasence (HALLOWEEN, ALONE IN THE DARK) and Nancy Allen (DRESSED TO KILL, CARRIE, ROBOCOP) are the hosts of this blood-curdling journey through a collection of horror classics like PSYCHO, JAWS, POLTERGEIST, ALIEN, THE BRIDE OF FRANKENSTEIN, THE EXORCIST, HALLOWEEN, THE TEXAS CHAINSAW MASSACRE, and MORE!

I've gotta say that Scream Factory really gave this flick more love than I had anticipated - the extras alone are enough to make me want to add this to my collection! TERROR IN THE AISLES is currently available wherever Blu-ray discs are sold and should cost between $23 - $25! Get yourself a copy of this nifty documentary today from AMAZON, BULL MOOSE, DIABOLIK DVD, or directly from SHOUT! FACTORY.