For Each of Man's Evils, A Special Demon Exists - Get Scream Factory's Limited Edition Blu-ray Steelbook of PUMPKINHEAD Today! 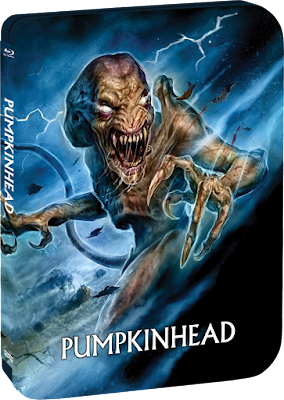 PREPARE TO DOUBLE-DIP ON STAN WINSTON'S "PUMPKINHEAD" - NOW WITH A NEW 4K TRANSFER AND GORGEOUS STEELBOOK PACKAGING!
I keep joking that Scream Factory has become the new Anchor Bay because they keep re-releasing certain titles with new packaging and/or transfers - case in point, their new steelbook of PUMPKINHEAD. Originally released by Scream Factory as a perfectly acceptable Collector's Edition back in September of 2014, this beloved creature feature has been given a noticeable video upgrade, contains all of the previous Blu-ray's special features, and comes housed in a beautifully-designed Steelbook case! Whether you already own this film on Blu-ray yet or not, you have to admit that this is definitely pretty damned enticing! Let's take a closer look, shall we?

Synopsis: When a group of teenagers inadvertently kill his only son, Ed Harley (Lance Henriksen - ALIENS) seeks the powers of a backwoods witch to bring the child back to life. But instead, she invokes "Pumpkinhead" – a monstrously clawed demon which, once reborn, answers only to Ed's bloodlust. But as the creature wreaks its slow, unspeakable tortures on the teens, Ed confronts a horrifying secret about his connection to the beast – and realizes that he must find a way to stop its deadly mission before he becomes one with the creature forever. A terrifying parable of revenge and possession, PUMPKINHEAD also stars Jeff East (DEADLY BLESSING), Joel Hoffman (SLUMBER PARTY MASSACRE II), and Kerry Remsen (A NIGHTMARE ON ELM STREET 2: FREDDY'S REVENGE).

Though it doesn't bring much else new to the table other than a new transfer and packaging (which will likely be eclipsed by the inevitable 4K Ultra HD release), Scream Factory's limited edition steelbook of PUMPKINHEAD is perty to look at, and a definite must-own title in its own right! This re-release is currently going for prices between $23 - $29, and can be ordered right now from AMAZON, BULL MOOSE, DIABOLIK DVD, or directly from SHOUT! FACTORY!