Everyone Knows a Machine Can't Kill... Except the Machine! KILLDOZER Makes Its Big Blu-ray Debut on October 20th! 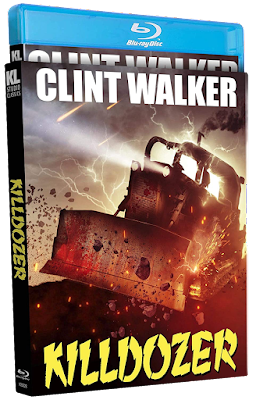 JERRY LONDON'S MADE-FOR-TV CULT CLASSIC GETS A NEW 2K TRANSFER AND BONUS FEATURES FROM KINO LORBER!
Well chalk up yet another film that I never thought would never get a proper Blu-ray release! Though I missed out seeing it back in 1974 (mostly because I was born in '83), I eventually saw KILLDOZER maybe a decade ago thanks to a bootleg obtained at a horror con and... it was kinda neat! And now this made-for-TV cult classic will be widely available for all to see thanks to the efforts of Kino Lorber Studio Classics!

The film has received a brand new 2K transfer (meaning it will look a thousand times better than it did when it first appeared on television in '74!) and contains some great new extras featuring director Jerry London! If you're a KILLDOZER fan, then just stop here and order a copy ASAP. But if you need a little more of a push to add this one to your collection, then read onward Vault Dwellers!

Synopsis: A small construction crew battles the ultimate assassin in the cult classic KILLDOZER. Stationed on a small island off the coast of Africa, six men find themselves terrorized when a ruthless life-form takes over a bulldozer and then sets off on a killing rampage. Despite limited fuel, the renegade machine methodically hunts down the men one by one in a full-throttle drive to death. Buckle up and hold on tight in this turbo-charged thriller! Directed by Jerry London (Shogun) and starring screen and TV legend Clint Walker (THE DIRTY DOZEN, Cheyenne) with Robert Urich (Vega$, THE ICE PIRATES) and Neville Brand (STALAG 17, KANSAS CITY CONFIDENTIAL). KILLDOZER is based on a novel by acclaimed television writer Theodore Sturgeon (Star Trek, The Twilight Zone) and features a rousing score by Gil Mellé (THE ANDROMEDA STRAIN, Night Gallery).

Kino's Blu-ray of KILLDOZER arrives on Tuesday, October 20th and should cost between $15 - $20! Relive your childhood, or experience KILLDOZER for first time  by adding it to your collection today! Order it now from AMAZON, BULL MOOSE, DIABOLIK DVD, or directly from KINO LORBER!