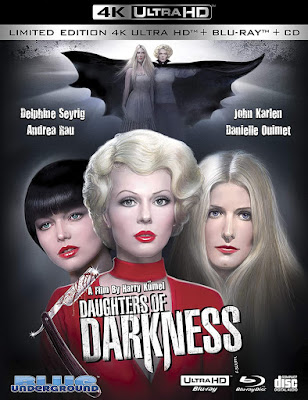 "DAUGHTERS OF DARKNESS" GETS A NEW 4K RESTORATION, HOURS OF EXTRAS, AND A SOUNDTRACK CD IN THIS 3-DISC LIMITED EDITION!
I've gotta admit Vault Dwellers, I'm kind of out of my element on this one as I've never seen DAUGHTERS OF DARKNESS before, but if it's good enough for Bill Lustig to release, then I guess it's good enough for me to watch! Harry Kumel's artsy tale of vampirism truly received the royal treatment for this release, which boasts a 4K restoration struck from an original negative, various new & existing bonus features, a lenticular cover, collectible booklet, and the soundtrack CD! If any of that piqued your curiosity or made you drool a tad, then keep reading to learn more about this latest addition to Blue Underground's catalog!

Co-written and directed by Harry Kümel, DAUGHTERS OF DARKNESS remains one of the most exquisitely mesmerizing adult horror films ever made. Blue Underground is now proud to present the uncensored Director s Cut of this classic psychosexual shocker in a gorgeous restoration, scanned in 4K 16-bit from its long-lost original 35mm camera negative, with Dolby Vision HDR and a new Dolby Atmos audio mix, packed with revealing extras!

Regardless of your feelings towards DAUGHTERS OF DARKNESS, you can't help but admit that this is likely the best the film has ever looked or sounded! Blue Underground's impressive limited edition 4K UHD / Blu-ray / CD combo pack is currently available wherever movies are sold and should cost between $39 - $53! (Pricey? Yes, but damned worth it for the restoration work alone I'd say!) If you're a fan of this film, or just enjoy collecting Blue Underground titles, then snap up a copy of DAUGHTERS OF DARKNESS today from AMAZON, BULL MOOSE, or DIABOLIK DVD!

Posted by The Vault Master at 1:31 AM