On November 17th, Lon Chaney Jr. is Your Guide into the INNER SANCTUM MYSTERIES! 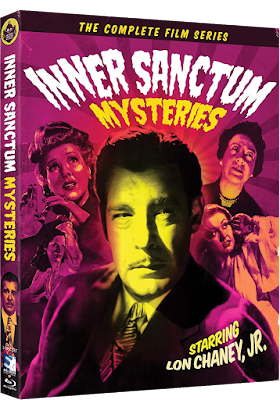 MILL CREEK ENTERTAINMENT BRINGS THIS FORGOTTEN FILM SERIES TO BLU-RAY DISC FOR THE FIRST TIME EVER!

In 1943, Universal Pictures obtained the rights to adapt six tales from the then popular Inner Sanctum Mystery radio plays into feature-length motion pictures. Starring the late Lon Chaney Jr., these six tales of murder and intrigue remained largely forgotten. But with every "boutique" label raiding the vaults of the big studios these days (e.g. Kino Lorber Studio Classics' Film Noir collections and Scream Factory's Universal Horror Collections), it was only a matter of time before someone dug these up - and that someone turned out to be Mill Creek Entertainment! Now all six Inner Sanctum Mystery films have made their Blu-ray debut and come complete with a number of great special features including audio commentaries, interviews, and an hour-long documentary, and some super cool digital extras! Read onward to find out more about this new release Vault Dwellers!

Synopses: Death, dementia, dark arts... it's just another day in the forbidding and fascinating world of the Inner Sanctum! Get ready for unlimited thrills and chills as all six classic Inner Sanctum Mysteries come to Blu-ray for the first time ever. Based on the popular radio shows of the 1940's, this collectible set is a must-own for every classic mystery and horror fan. You'll have a hauntingly good time with horror icon Lon Chaney, Jr., as he gives timeless performances in these spooky feature-length films:

Calling Dr. Death (1943) - A doctor is not sure if he murdered his wife and has his nurse try to find the truth by hypnotizing him.

Weird Woman (1944) - While on a trip, a professor falls in love with an exotic native woman who turns out to be a supernatural being.

Dead Man's Eyes (1944) - When an artist is blinded, an operation to restore his sight depends on another person willing to donate their eyes.

The Frozen Ghost (1945) - A stage mentalist and a discredited plastic surgeon are involved in mysterious goings-on in an eerie wax museum.

Strange Confession (1945) - Flashbacks reveal the events leading up to a man's revenge on the racketeer who took advantage of his wife.

Pillow of Death (1945) - A lawyer in love with his secretary is suspected of suffocating his wife, among others.

I gotta say Vault Dwellers, Mill Creek has certainly stepped up their game in the past few years. Between their INNER SANCTUM MYSTERIES set, their ongoing releases of the ULTRAMAN series, Andy Sidaris' entire film catalog, and their upcoming HAMMER FILMS: ULTIMATE COLLECTION, they are absolutely killing it right now!

If you want to get your paws on Mill Creek's INNER SANCTUM MYSTERIES set, you best pre-order now! This 2-disc set goes for between $40 - $43 (pretty cheap, no?) and can easily be obtained from AMAZON, BULL MOOSE, or DIABOLIK DVD! Go ahead and treat yourself to this set Vault Dwellers, and while you wait, feel free to click below and listen to dozens of episodes of the classic Inner Sanctum Mysteries radio play via a handy YouTube playlist I stumbled across!

Posted by The Vault Master at 1:54 AM