On October 27th, a New Documentary Proves That WOLFMAN'S GOT NARDS! 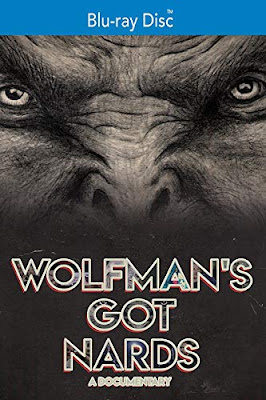 THE 2018 DOCUMENTARY ABOUT THE BELOVED CULT CLASSIC "THE MONSTER SQUAD," FINALLY MAKES ITS WAY TO BLU-RAY DISC!

Fred Dekker's THE MONSTER SQUAD is one of the few films from my childhood that has held up to my adult scrutiny - honestly I think I love it more now than I did then. In fact, I just watched it the other day after putting it on for two of my visiting tween nieces. They seemed to like what they saw... in between the moments they weren't glued to their phones or fussing over their baby cousin.

And now, the ultimate companion piece to THE MONSTER SQUAD is here with the Blu-ray release of Andre Gower's WOLFMAN'S GOT NARDS, a feature-length documentary about the making of the film and it's gradual rise from a box-office flop, to a full-fledged classic with a massive fan-base! The disc seems to be bare bones, but I truly do not care and cannot wait until this upcoming Halloweekend to inject this massive dose of nostalgia into my eyeballs!

Synopsis: When it was released in 1987, THE MONSTER SQUAD was deemed a failure by critics and was, according to the box office, a film no one cared about. But over the last three decades, word of mouth has turned this sleeping hit into a cultural phenomenon.

WOLFMAN'S GOT NARDS arrives on Blu-ray today and should cost between $14 - $20! If you're a fellow MONSTER SQUAD fan like yours truly, then pick up a copy of this fantastic-looking doc now from AMAZON or BULL MOOSE!