Not All Aliens Come From Space - DEEP STAR SIX is Now Available on Blu-ray! 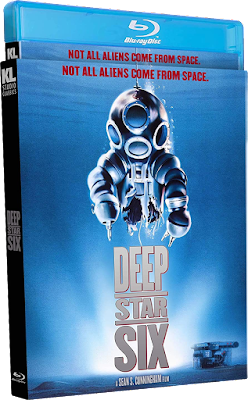 KINO LORBER STUDIO CLASSICS GIVES SEAN CUNNINGHAM'S UNDERWATER CREATURE FEATURE AN ALL NEW SPECIAL EDITION BLU-RAY RELEASE!
The year was 1989: THE ABYSS had come out and wowed audiences, and in short order four other films attempted to capitalize on the popularity of James Cameron's aquatic sci-fi epic: LEVIATHAN, THE RIFT (aka ENDLESS DESCENT), Roger Corman's LORDS OF THE DEEP, and Sean Cunningham's DEEP STAR SIX! Long out of print in any format, this oft-forgotten sci-fi thriller arrives on Blu-ray for the first time with a collectible cardboard slipcover and a slew of special features including cast & crew interviews, two audio commentaries, and more! If you're as excited as I am for this release, then keep reading to get all the details Vault Dwellers!

Far below the surface of the unforgiving sea, the daring crew of DeepStar Six are explorers in a forbidding world of impenetrable darkness and unimaginable pressure. They have invaded the icy fathoms into which no human has ever ventured. Their mission is to establish a top secret Navy base on the ocean floor. But something’s down there and the crew of DeepStar Six are about to make a startling discovery—there’s no escape from the terror of the deep. DeepStar Six will plunge you into the depths of fear… save your last breath... to scream! 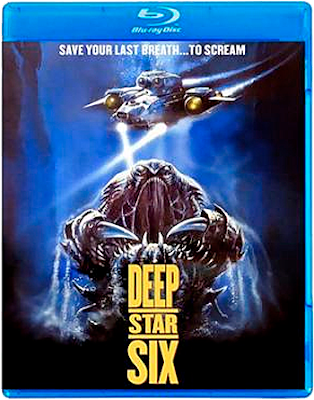 Yowza! That is way more love than I could have ever expected this film to get - good on you Kino Lorber! The Special Edition Blu-ray of DEEPSTAR SIX is now available to buy at most retailers and should cost between $18 - $30! Pick up a copy for your collection today from AMAZON, BULL MOOSE, DIABOLIK DVD, or get it directly from KINO LORBER's online store!

Posted by The Vault Master at 1:28 AM