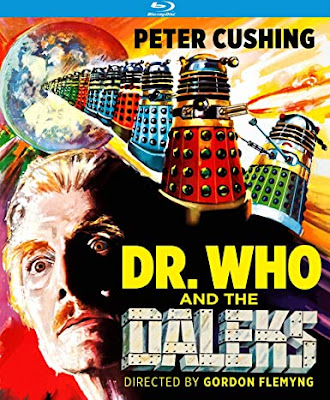 I have yet to really delve into the realm of Dr. Who, but I am familiar with the vast majority of actors who have portrayed the character over the decades. But imagine my surprise years ago when I attended a 35mm film festival and got a rare chance to see DR. WHO AND THE DALEKS on the big screen, featuring Peter Cushing as the titular sci-fi hero! And now this oft-forgotten film, and it's followup, DALEKS' INVASION EARTH 2150 A.D., are available to own on Region A Blu-ray disc thanks to the efforts of Kino Lorber Studio Classics! Both films appear to feature the same transfer and extras as their Region B counterparts, however, the audio track for DR. WHO AND THE DALEKS has been newly restored, and now features dialogue, sound effects, and music that has been missing from previous releases! Whether you're a "Whovian," or a Peter Cushing completist, you'll definitely want to add these two flicks to your collection ASAP!

Synopsis: Screen legend Peter Cushing (THE SKULL, THE HOUND OF THE BASKERVILLES, MADHOUSE) plays everyone’s favorite Timelord, and having invented the TARDIS, a strange machine capable of traveling into other dimensions, the Doctor and his three young accomplices set forth on a quest through time and space. Their journey takes them into the dark, undiscovered depths of the universe and to the planet of Skaro, a primitive world devastated by nuclear war and populated by two warring species: a peaceful tribe known as the Thals and a life form heavily mutated by radiation, encased in protective machines... a merciless force of destruction known as the Daleks!

Now fully restored, DR. WHO AND THE DALEKS, directed by Gordon Flemyng (THE SPLIT, GREAT CATHERINE), was the first big-screen film adaptation of British TV’s most iconic sci-fi hero, and was the first time Doctor Who was ever seen in color! Screenplay by Milton Subotsky (THEY CAME FROM BEYOND SPACE), based on the original BBC TV serial by Terry Nation (The Avengers).

Extras:
DR. WHO AND THE DALEKS is now available on Blu-ray disc and should cost you somewhere between $18 - $20! Order yourself a copy now from AMAZON, BULL MOOSE, DIABOLIK DVD, or directly from KINO LORBER! 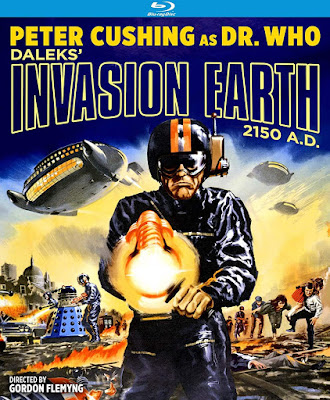 Synopsis: The Earth of 2150 A.D. is a desolate and hostile ruin of a planet, crumbling at the edge of civilization, slowly disappearing into the darkness of space. For the future of planet Earth now belongs to the Daleks, a destructive army of alien invaders who have turned the human race into cowering slaves. Meanwhile deep within the London Underground a group of resistance freedom fighters are planning an attack.

But there’s only one man who could possibly help them succeed in destroying their extraterrestrial enemies and take back control of planet Earth. A man of mystery, a man of time and space, a man known only as… The Doctor. Now fully restored, DALEKS' INVASION EARTH 2150 A.D., directed by Gordon Flemyng, stars screen legend Peter Cushing (HOUSE OF THE LONG SHADOWS) in his return to the big screen as British TV’s most iconic sci-fi hero!

Extras:
DALEKS' INVASION EARTH 2150 A.D. is now available to own on Blu-ray disc and should cost between $18 - $20. Order your copy now from AMAZON, BULL MOOSE, DIABOLIK DVD, or get it directly from KINO LORBER!