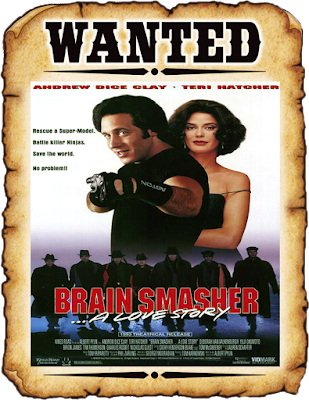 While many of you reading this were introduced to Andrew Dice Clay through his stand up (gotta love those dirty nursery rhymes), or perhaps his lead role in THE ADVENTURES OF FORD FAIRLANE (which earned him a Razzy Award for Worst Actor!), my first brush with "the Diceman" was in the mid-90s when I caught BRAIN SMASHER... A LOVE STORY late one night on Cinemax.

Suffice it to say, I was looking for ahm.... other entertainment on that particular cable channel that fateful night, but what I found turned out to be so much better! In BRAIN SMASHER, Andrew Dice Clay is a nightclub bouncer who ends up battling ("We are NOT") ninjas to rescue a beautiful model  and stop a martial arts madman from becoming (possibly) immortal! Directed by Albert Pyun (ARCADE, CAPTAIN AMERICA), this fun little romantic Action-Comedy quickly became a personal favorite in my early teenage years, but just as quickly vanished once the VHS-era came to a close.

We're now heading towards the 30th anniversary of this low-budget gem, and it still hasn't had a DVD release here in the United States (though it did briefly pop up on NetFlix around 2012), and doesn't seem to be high on anyone's list for a Blu-ray debut. So once again I find myself fighting the good fight and taking up the cause for a movie that deserves more love!

Synopsis: An adventurous botanist discovers a rare (and legendary) red lotus flower and mails it off to her supermodel sister Samantha Crain (Teri Hatcher), in Portland, Oregon. Hot on the trail of said lotus (whose petals can allegedly imbue anyone who eats them with special powers.... or immortality... or... something...) is a clan of murderous Shaolin monks (in Kato masks) who can catch bullets with their bare hands and hate being called ninjas!

With the monks hot on her heels, Samantha runs for her life and into Ed Malloy (Andrew Dice Clay), a nightclub bouncer dubbed The Brain Smasher. Not one to ignore a pretty face, the trash-talking, wise-cracking Ed is dragged into the chase and uses his innate ability to brutally knock people out to protect the beautiful Samantha. As Ed and Sam flee from the tenacious villains, they start to develop feelings for one another. Will their blossoming love survive the kung fu onslaught of the power hungry murder monks?! The only way to find out is to watch BRAIN SMASHER.... A LOVE STORY... if you can find a copy that is.

Availability: This movie has been out of print in the U.S. since it's (straight to) VHS release in the late-1990s. While is has received DVD releases in Australia and the UK, BRAIN SMASHER has never enjoyed a wide release. If you want to check out this film, you can order a DVD-R from VHSPS.COM for $15 or watch a VHS-rip on YouTube HERE.

Current Rights Holder: This may be an easy one to figure out Vault Dwellers - follow me down this little rabbit hole, won't you? BRAIN SMASHER was released by Vidmark Entertainment, a company that was created in 1984 to distribute films internationally. In 1988, they started producing their own movies, starting with the unexpectedly profitable DEMONWARP, and would eventually (by 1991) change over to Trimark Entertainment, which later merged with Lionsgate less than a decade later. Therefore.... unless Albert Pyun somehow got the rights to the film, BRAIN SMASHER is still with Lionsgate. So if you really want this movie on Blu-ray, you know who to bother first!

BRAIN SMASHER... A LOVE STORY is a time capsule from the portion of my life when I was making that awkward transition from child to teenager, and was one of the numerous cult gems I discovered as my love of cinema grew with me. While it certainly isn't some long-forgotten classic that the world has unjustly ignored, Albert Pyun's little direct-to-video production is a lot of fun and deserves to be seen by more people - it's on the cusp of being a cult classic I tell ya! So if I've ignited your curiosity, or dredged up fond memories of this film, then please spread the word around and maybe, just maybe, we can convince the powers that be at (I'm assuming) Lionsgate to give BRAIN SMASHER a new shot at finding its audience!