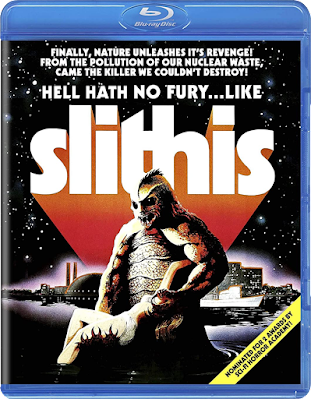 SLITHIS (aka SPAWN OF THE SLITHIS) came across my radar decades ago when, you guessed it, I found a copy at a local video store! While it didn't quite blow me away back then, I admit that I enjoyed it a helluva lot more when I saw it in 35mm with a crowd at a pre-Covid film festival! (Sigh... those were the days...)

After decades of being forgotten, SLITHIS debuted on DVD in 2010, and finally arrived on Blu-ray disc 2017, when it was released as a limited edition title with a really cool slipcover! But now, four years later, the amphibious creature born of radioactive sludge has returned to occupy a spot in your movie collection! If you're a fan of films featuring men in rubbery monster suits then you'll definitely want to pick this one up Vault Dwellers!

Synopsis: Finally, nature unleashes its revenge! From the pollution of our nuclear waste came the killer we cannot destroy. Our worst nightmares come to life with the terrifying, scaly monster – SLITHIS! First this nuclear mutant killed household pets near the canals of Venice, California. Now it preys on old couples and a homeless rotund man sleeping in the public men’s room! In the tradition of JAWS, two outcasts, a teacher and a Jamaican sea-hunter, will take on the horrific monster to stop the slaughter! This mud monster creature is something out of those 50’s classics we love!

Code Red's Blu-ray re-release of SLITHIS should cost between $18 - $23 and is currently available wherever Blu-ray discs are sold! Get yourself a copy today from AMAZON, BULL MOOSE, or RONIN FLIX!