Now on Blu-ray: An Unspeakable Terror, Hidden in Darkness Awaits You in THE UNSEEN! 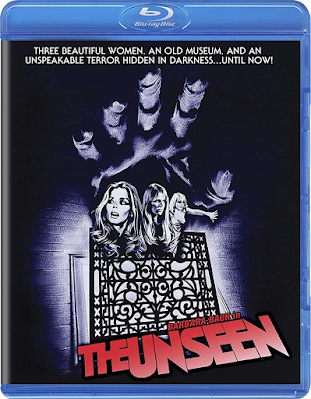 DANNY STEINMANN'S BIZARRE AND OFT-FORGOTTEN HORROR CLASSIC RETURNS TO BLU-RAY THANKS TO SCORPION RELEASING AND KINO LORBER!
Before directing SAVAGE STREETS featuring Linda Blair, and the fourth FRIDAY THE 13TH sequel, Danny Steinmann cut his teeth as a Horror director with 1980's THE UNSEEN. I never even knew this film existed until three years ago, when I saw it in 35mm during one of Exhumed Films' 24-Hour Horrorthons. And though I haven't seen it since I would gladly give it another look, so I'm stoked that it is once again readily available on Blu-ray disc! Never heard of it? Well then keep reading Vault Dwellers to see if this might become a new addition to your Blu-ray collection!

Synopsis: A TV reporter (Barbara Bach - THE SPY WHO LOVED ME, FORCE 10 FROM NAVARONE) and two friends head to Solvang, California, to cover a Danish festival. When a mix-up at the hotel leaves them stranded without rooms, the girls accept the invitation of a friendly museum owner to board at his farmhouse. But what the women don’t know is that something is living in the basement – something unspeakable. Their stay soon becomes a horrific nightmare when they encounter THE UNSEEN!

Scorpion Releasing/Kino Lorber's new reissue of THE UNSEEN is now available wherever Blu-ray discs are sold, and should cost between $18 - $23! Add this obscure cinematic oddity to your collection now by ordering a copy from AMAZON, BULL MOOSE, DIABOLIK DVD, or directly from KINO LORBER!