No One Is Coming To Save You: CENTIGRADE Now Available on DVD & Blu-ray from Scream Factory! 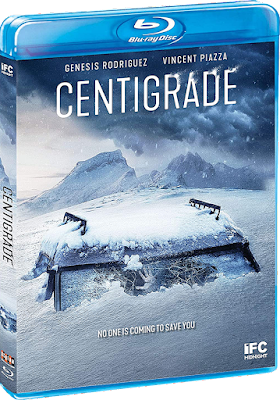 BRENDAN WALSH'S SURVIVAL THRILLER WILL MAKE YOU THINK TWICE ABOUT PARKING YOUR RIDE IN THE SNOWY MOUNTAINS OF NORWAY!
Loosely based upon multiple accounts of people being trapped in their vehicles by snow, CENTIGRADE attempts to do for vacationing in Norway what Adam Green's FROZEN did for skiing. Shot in sequence inside an ice cream freezer with two half-starved leads, director Brendan Walsh wanted this film to feel as realistic as possible. But did his efforts create a good film? The only way to know for sure is to pick up a Blu-ray (or DVD) copy of CENTIGRADE now that it is currently available to occupy that teensy bit of empty space in your ever-growing Scream Factory collection!

Synopsis: Inspired by real events, this harrowing film follows a young American couple, Matt and Naomi, as they travel through the Arctic mountains of Norway. After pulling over during a snowstorm, they wake up trapped in their SUV, buried underneath layers of snow and ice. As if the stakes aren't high enough for the pair, Naomi is eight months pregnant as they contemplate how to escape their frozen prison.

With few resources, a dwindling food supply, and nothing but time, the couple endure mounting tension, blame, and personal secrets bubbling to the surface. Matt and Naomi realize they must work together to survive in a crippling battle against the elements, hypothermia, disturbing hallucinations, and plunging temperatures reaching far below zero. Will they make it out of this alive?

Chill out with IFC Midnight/Scream Factory's CENTIGRADE, which is now available wherever Blu-ray discs are sold, and should cost between $16 - $19. Order yourself a copy today from AMAZON, BULL MOOSE, or directly from SHOUT! FACTORY.