Donald Cammell's WHITE OF THE EYE coming to Scream Factory Blu-ray in November! 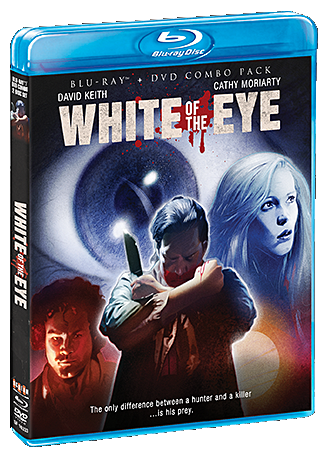 GET SCREAM FACTORY'S "WHITE OF THE EYE" BLU-RAY/DVD COMBO PACK ON NOVEMBER 10TH!

Scream Factory continues working their magic by releasing another genre film I am not familiar with. Guess I'll just add it to my ever-growing want-list of their titles.

Film Synopsis: A twisted killer is on the loose. He tortures and dissects his victims as part of a primitive ritual. If you’re a wealthy, attractive woman, stay out of isolated desert community, because you are fair game. Housewife Joan White gradually comes to suspect that her opera-loving husband Paul might know more than he’s letting on...

All the clues lead to one man who is clearly innocent. But nothing is as simple as black and white in Donald Cammell’s 1987 suspense thriller WHITE OF THE EYE!

WHITE OF THE EYE will be available everywhere on November 10th, and retails for about $30. You can get a it from AMAZON.COM, or you could order this DVD/Blu-ray combo directly from SHOUT! FACTORY and receive it TWO WEEKS EARLY!