Scream Factory gives you a double dose of TALES FROM THE CRYPT this Halloween season! 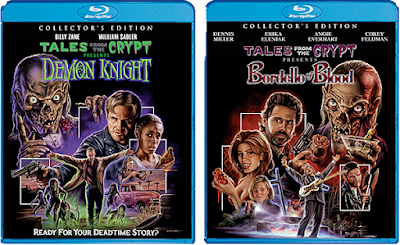 ON OCTOBER 20TH, BATTLE EVIL WITH "DEMON KNIGHT," AND PAY A VISIT TO "THE BORDELLO OF BLOOD" WITH SCREAM FACTORY'S NEW "TALES FROM THE CRYPT" COLLECTOR'S EDITION BLU-RAYS!

I am an unapologetic fan of DEMON KNIGHT. It has a great premise, and outstanding cast, and has remained as one of my all-time favorite genre films. BORDELLO OF BLOOD, while not nearly as good, is still a lot of fun in it's own right, and I cannot wait to add these to my personal collection!


Film Synopses: DEMON KNIGHT - A mysterious drifter known as Brayker (William Sadler) possesses the last of seven ancient keys that hold the power to stop the forces of darkness and protect all humanity from ultimate evil. But the human race is safe only so long as Brayker can evade the demonic Collector (Billy Zane) who has gathered the other six keys.

In his obsessive quest for the key, the Collector rallies an army of ghastly cadavers against Brayker and the inhabitants of a run-down hotel. Armed with automatic weapons, sacred blood and sadistic humor, Brayker and the strong-willed Jeryline (Jada Pinkett-Smith) must lead the other guests in a gruesome battle against the Collector and his evil horde of ghouls.

Soon Rafe finds himself up to his neck in a den of hungry vampiresses and battling the Reverend Jimmy Current (Chris Sarandon), a slick televangelist with an unstoppable talisman.

Both Blu-ray titles will be available wherever Blu-rays are sold on Tuesday, October 20th! You can order DEMON KNIGHT and BORDELLO OF BLOOD from AMAZON.COM. Or, you could order both directly through SHOUT! FACTORY's online store (HERE and HERE) and get them TWO WEEKS EARLY WITH A COLLECTIBLE POSTER (while supplies last)!

Sigh... not only do I need more money to buy these, but now I need new shelves because my Blu-ray rack is overflowing! CURSE YOU SCREAM FACTORY! CURSE YOUUUUU!