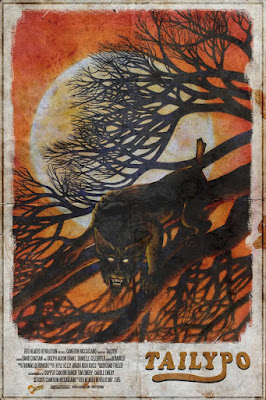 So right now, you are probably asking yourself the very question that I did when director Cameron McCasland sent me a link to his new short film: What in the hell is a Tailypo?! It's a cat-like creature of legend from the Appalachians. It seeks out anyone that somehow comes into the possession of its tail, and will call out in the night "Tailypo. Tailypo! Who has my Tailypo?!"

I thought McCasland's TAILYPO was pretty nifty. I've never heard of the legend before (odd since I don't live all that far from the Northern-most part of Appalachia), and I think it lends itself well to a short film format.

I enjoyed this little fourteen minute movie, and my only gripe is that the filmmakers didn't have the money to create a more convincing creature. But don't take that as a condemnation of TAILYPO: It's well made and something spooky you can share with your kids!

Watch the video below, and see what happens when a poor hunter and his dog run afoul of the mythical Tailypo!