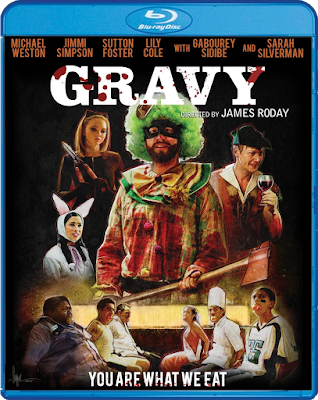 Last June I reported that Scream Factory had acquired the North American rights to James Roday's GRAVY. Now Summer is just about over with, and we're only a few short weeks from finally seeing this new cult horror-comedy!

Film Synopsis: It’s Halloween night. A trio of costumed misfits with very special dietary requirements seizes a Mexican cantina and forces the staff to engage in a late night of gluttony. The only caveat is what’s on the menu… and who will survive ‘til morning!

This deliriously demented horror-comedy is a true feast for genre fans. Stuffed with an outstanding ensemble cast and perfectly seasoned with laughs and scares, you’ll be sure to ask for seconds on Gravy.

GRAVY will arrive in select theaters on Friday, October 2nd, and then will be released on DVD, Blu-ray, and Video On Demand services on October 6th! You can order it from AMAZON.COM, or directly from SHOUT! FACTORY.
On the fence about picking this one up? Then watch the trailer below to make up your mind!