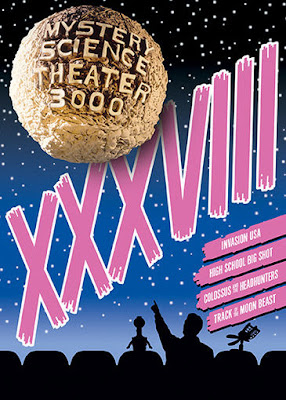 FOUR MORE EPISODES OF MST3K COME TO DVD, THANKS TO SHOUT! FACTORY!

Nothing gives me the warm and fuzzies more than seeing the release of yet another new Mystery Science Theater 3000 DVD set! And with a brand-spanking new season premiering in just a few weeks on NetFlix, four more classic episodes making their DVD debut is just icing on the cake!

Read on fellow MSTies, and learn more about this all new collection which is made up entirely of Mike Era episodes and loaded with cool extras!

EPISODES
602 - INVASION U.S.A.: When not in the theater and riffing for their lives, the SOL crew tries to have a family "date," (inspired by the short that precedes the feature film, A Date With Your Family) and Mike Nelson tries to build a new robot companion. As for the film itself, INVASION U.S.A. is not an over-the-top Chuck Norris action film, but an old "Red Scare" film that focuses on a group of bar patrons who believe that the Russians have secretly invaded America!

618 - HIGH SCHOOL BIG SHOT: A dorky kid agrees to take part in a heist in order to win the attention of a pretty (but dumb) classmate. Meanwhile Crow and Tom try to break into Gypsy's diary, "innocently" egg Mike, and reenact the film's finale during the fan mail portion of the show. This episode also comes with a bizarre short entitled, Out of This World, a cautionary film made to keep bread truck drivers on the straight and narrow.

605 - COLOSSUS AND THE HEADHUNTERS: Legendary strongman Maciste (My Cheesesteak?) leads his people from their sinking island, to a land of warring tribes in this sword and sandal "classic." This episode is probably best known for TV's Frank's creation "Nummy Muffin Coocol Butter!"

1007 - TRACK OF THE MOON BEAST: A meteor shard falls to Earth and embeds itself in the skull of a mineralogist named Paul. Then, on nights of the full moon, Paul transforms into a murderous were-lizard! Once his secret is out, the woman he loves (a "reporter" that wears skimpy knitted outfits) and his Native American pal Johnny Longbow, must find a cure, or find a permanent way to stop Paul from killing again! During this cinematic misadventure, Mike and the bots learn the joys of an onion blossomer, reenact a goofy scene from the movie, and tell the tragic backstory of "The Band that played California Lady."

MST3K COLLECTION: VOLUME XXXVIII is now available, and can be purchased (in the realm of forty dollars) at AMAZON and BULLMOOSE. However, if you order it directly from SHOUT! FACTORY, you stand a good chance of getting the highly sought-after Play MSTie For Me Triple Decker DVD!

This bonus disc comes with thirty-nine musical moments from MST3K's first ten seasons, and has all your fave MST3K hits like "Creepy Girl," "Idiot Control Now," "The Canada Song," and more! However, this disc is limited to 1,500 copies, so get yours now while supplies last!