Scream Factory Burns a Hole in Your Pocket with their Collector's Edition Blu-ray of FIRESTARTER! 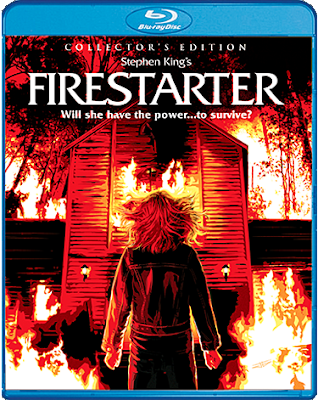 FIRESTARTER seems to be criminally overlooked by most Stephen King fans. That's a shame because it is a pretty cool little movie, featuring a young, pyrokinetic Drew Barrymore fighting for her life against a clandestine government agency looking to create and weaponize people with special abilities! If you haven't seen this one Vault Dwellers, then definitely check it out! It's a classic that deserves more love!

Synopsis: Based on the unforgettable best-seller by esteemed horror author Stephen King, FIRESTARTER chronicles the extraordinary life of Charlene "Charlie" McGee. Eight-year-old Drew Barrymore stars as the child who has the amazing ability to start fires with just a glance. Can her psychic power and the love of her father save her from the threatening government agency, "The Shop," which wants to control her… or destroy her?


Extras:
This new Collector's Edition of FIRESTARTER gives the film more TLC than it has ever had before, and I can't wait to add it to my own personal collection! FIRESTARTER: COLLECTOR'S EDITION is now available and can be purchased at AMAZON, BULLMOOSE, DIABOLIK DVD, or directly from SHOUT! FACTORY. (Which will also net you a cool 18x24 poster featuring the Blu-ray's new cover art!)