Saddle Up for some classic Harryhausen! THE VALLEY OF GWANGI makes its Blu-ray debut on March 14th! 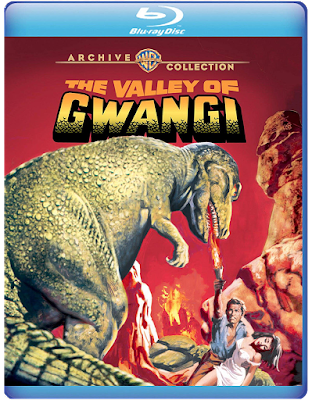 THE BEST COWBOYS VS. DINOSAURS FILM OF ALL TIME, FINALLY COMES TO BLU-RAY ON MARCH 14TH FROM THE WARNER ARCHIVE COLLECTION!

I've always been a big Ray Harryhausen fan, and THE VALLEY OF GWANGI still has one of the most impressive stop-motion effects sequences ever committed to film. (i.e. "The Roping of Gwangi" sequence) And now I am happy to report that this classic dino-filled adventure is making the leap to high-definition this Tuesday!

Synopsis: Cowpokes head into a mysterious Mexican valley to head em up and move em out. But they're not looking for little doggies. They're looking for great big dinosaurs! James Franciscus stars in this thunderous adventure featuring amazing special effects by Ray Harryhausen (THE BEAST FROM 20,000 FATHOMS, EARTH VS. THE FLYING SAUCERS, et al.)

Franciscus plays a Wild West showman who leads his riding and roping crew into legendary VALLEY OF GWANGI, where prehistoric giants still roam. Thanks to Harryhausen wizardry, fantastic creatures lunge, fight and rampage in scene after dazzling scene (including an awesome sequence where the cowboys rope Gwangi, a razor-toothed Allosaurus). Saddle up and join the excitement!

Extras:
THE VALLEY OF GWANGI comes out on Tuesday, March 14th from The Warner Archive Collection. You can order it now from AMAZON, BULLMOOSE, and DIABOLIK DVD! If you love classic dinosaur cinema, or happen to be a fan of Ray Harryhausen's work, you owe it to yourself to pick this disc up!