Scream Factory's JACKALS will brainwash you this October! 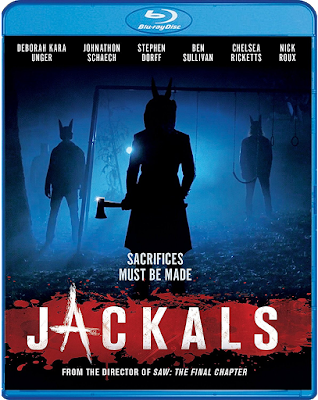 ON OCTOBER 3RD, JOIN A FAMILY UNDER SIEGE WHEN SCREAM FACTORY UNLEASHES "JACKALS" TO DVD AND BLU-RAY!

I have yet to watch JACKALS, but have been hearing mostly positive things about it. It is currently available to stream on Amazon and other VOD platforms, before its DVD & Blu-ray debut in a few short weeks! Let's take a closer look at this release, shall we?

Synopsis: From director Kevin Greutert (SAW: THE FINAL CHAPTER) comes a disturbing vision of a fractured family that will do anything to get the son they love back from the unspeakable evil that has taken control of his mind.


When Justin Powell (Ben Sullivan) is captured by two ski-masked men and dragged back to a secluded cabin, it's anything but a standard kidnapping. Waiting for Justin at the cabin is his father (Johnathon Schaech, THAT THING YOU DO!), mother (Deborah Kara Unger, CRASH, SILENT HILL), brother (Nick Roux), and former girlfriend (Chelsea Ricketts). Together, they are dedicated to freeing him from the sinister brainwashing he's undergone at the hands of a vicious cult known as "The Jackals."

With the help of Jimmy Levine (Stephen Dorff, BLADE), an experienced cult deprogrammer, the family does their best to bring Justin back to reality … but their plans go awry when the cult descends upon the cabin, demanding Justin back. A vicious battle unfolds, testing familial loyalties and unleashing a bloodbath from which no one is safe.

Extras:
JACKALS comes to DVD and Blu-ray on Tuesday, October 3rd and can be ordered now from AMAZON, BULLMOOSE, or directly from SHOUT! FACTORY. Not entirely sold on the movie? Then give the trailer a watch below!