Celebrate He Who Walks Behind the Rows With Arrow Video's Special Edition Blu-ray of CHILDREN OF THE CORN! 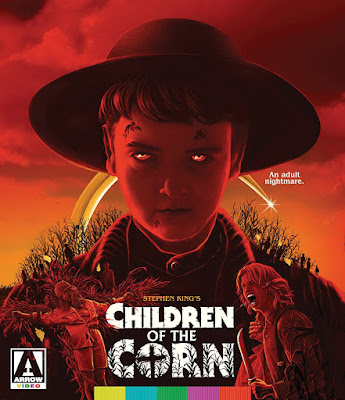 ON OCTOBER 3RD, ARROW VIDEO GIVES "CHILDREN OF THE CORN" A MUST HAVE SPECIAL EDITION RELEASE!

CHILDREN OF THE CORN has always been one of my favorite Stephen King adaptations, and it still holds up relatively well over three decades later. (The nine followup films... haven't fared as well.) So naturally I'm pretty stoked for this Arrow release, which boasts a ton of extras, and an all new 2K transfer of the film!

Synopsis: From the mind of celebrated horror author Stephen King, the man behind such classic terror tales as The Shining, Carrie and It, comes one of his most chilling offerings yet: CHILDREN OF THE CORN.

A young couple on a road trip find themselves lost in the back roads of rural Nebraska, eventually winding up in the seemingly abandoned town of Gatlin. But the town is far from empty as the pair soon discover that it's inhabited by a twisted cult of murderous children thirsty for another blood sacrifice...

Adapted from King s eponymous short story first published in 1977 and starring Linda Hamilton (THE TERMINATOR) and Peter Horton (Thirtysomething), CHILDREN OF THE CORN has gone on to spawn one of the most enduring horror franchises of all time.

Extras:
Wow! Arrow Video went all out for this release, and I hope to add it to my collection in the very near future! CHILDREN OF THE CORN: SPECIAL EDITION will be available on October 3rd (though that release date could be subject to change), and you can order it now from AMAZON, BULLMOOSE, or DIABOLIK DVD!