THE ILLUSTRATED MAN and INNOCENT BLOOD are Comign to Blu-ray on September 19th! 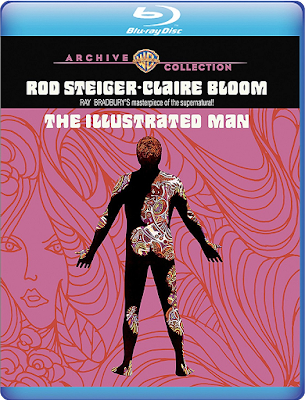 Confession time Vault Dwellers: I have never seen THE ILLUSTRATED MAN or INNOCENT BLOOD. Maybe that's not such a big shocker in regards to the 1969 anthology film based upon the works of Ray Bradbury. But as a fan of John Landis' work, I should have seen INNOCENT BLOOD at some point in time! And now I can!

THE ILLUSTRATED MAN (1969)
Synopsis: Rod Steiger plays the tattoo-covered title role in this fascinating vision of doom and danger based on the classic short story collection by futurist Ray Bradbury. Robert Drivas portrays a good-natured drifter who can't tear his eyes away from Steiger's freakish illustrations. And Claire Bloom is the mysterious seductress who created the "art" that curses its bearer – and comes to life in a nightmarish trio of tales.

Two spoiled children turn playtime into slay time (from The Veldt). Shipwrecked astronauts wander across a planet cursed by The Long Rain. And loving parents choose their children's fate when the end nears (from The Last Night of the World). Every one of THE ILLUSTRATED MAN's pictures tell a story. And every story ends in terror!

Extras:
THE ILLUSTRATED MAN will be available for purchase on Tuesday, September 19th! You can order a copy of this long out of print title now (on DVD or Blu-ray) at AMAZON, BULLMOOSE, or DIABOLIK DVD! 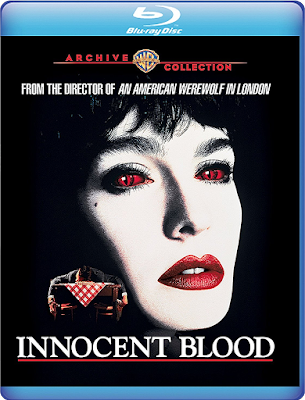 INNOCENT BLOOD (1992)
Synopsis: This ghoul just wants to have fun! She also wants an occasional bad guy to sink her fangs into – because she never, ever takes INNOCENT BLOOD!

Anne Parillaud is Marie, a vampire who imperils Pittsburgh when she fails to kill off one of her victims, mob boss Sal Macelli (Robert Loggia). Sal realizes what a lucky stiff he is: A vampire with deadly powers! If Marie and her undercover cop boyfriend (Anthony LaPaglia) can't stop the mobster's new "family" of goons, Pittsburgh will be the pits.

As in his AN AMERICAN WEREWOLF IN LONDON, director John Landis saw in Michael Wolk's script many "possibilities to be outrageous" – and transforms them into outrageous screen reality! With more than two minutes of never-seen-in-the-US footage, INNOCENT BLOOD is ready to drain you like never before!

Extras:
INNOCENT BLOOD makes its long-awaited Blu-ray debut on Tuesday, September 19th! Though it would have been nice to have two versions of the film on one disc (along with some interviews, featurettes, or even a director's commentary), I guess we can't complain too much, since this is the first time many of us will be seeing the longer cut of John Landis' vampire flick! You can currently order this title from AMAZON, BULLMOOSE, or DIABOLIK DVD!