On January 2, 2018, Scream Factory invites you to spend a night in Garth Manor! 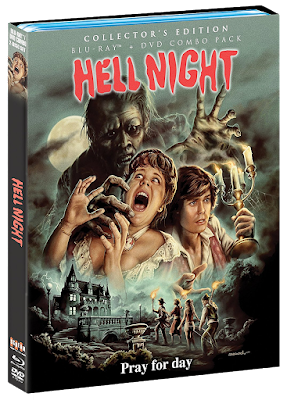 SCREAM FACTORY'S NEW COLLECTOR'S EDITION OF "HELL NIGHT" IS THE RELEASE THAT FANS HAVE BEEN
DYING FOR!

I've always regarded HELL NIGHT as a minor classic in the slasher sub-genre, and it has really grown on me over the years. Having seen it on VHS, DVD, and even in 35mm, I am super stoked for the new 4K-remastered presentation of the film! Let's take a closer look at this must-own Blu-ray/DVD combo pack, shall we?!

Synopsis: As an initiation rite into Alpha Sigma Rho fraternity, four pledges must spend a night in Garth Manor, twelve years to the day after the previous resident murdered his entire family. Two of the pledges, Marti and Jeff ignore the rumors that the now-deserted mansion is haunted by a crazed killer, until one by one, members of their group mysteriously disappear. Could this be a part of a fraternity prank ... or is a demented former tenant seeking revenge?

Yowza January 2nd cannot come soon enough! This is WAY more love than I had ever anticipated for HELL NIGHT! The wealth of new interviews and featurettes, plus the 4K transfer (which does include some standard definition footage because the print they utilized was missing a few scenes), makes this the last copy of HELL NIGHT you will ever have to buy!

Speaking of which, you can order HELL NIGHT right now from AMAZON, BULLMOOSE, DIABOLIK DVD, or directly from SHOUT! FACTORY. If you order from Shout!, your disc will ship TWO WEEKS EARLY and come with a free 18x24 rolled poster featuring the newly created cover art for this release!

Man... I really hope this is under my tree on Christmas morning!