TRAILER ROUND-UP: BATMAN - GOTHAM BY GASLIGHT, DAY OF THE DEAD - BLOODLINE, JURASSIC WORLD - FALLEN KINGDOM, and ONCE UPON A TIME ON CHRISTMAS! 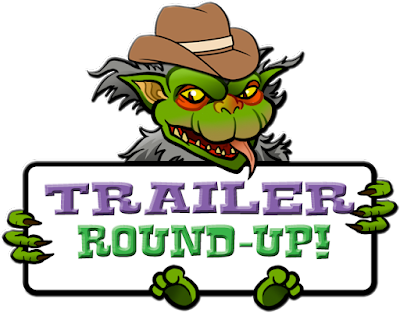 It has been a LONG time since I last shared some new trailers, so I figured it was time to get back to it Vault Dwellers! For this edition of the News Vault's Trailer Round-Up, I selected four new previews to share with you, featuring  dinosaur rescues, killer Clauses, brainy zombies, and a new DC animated Batman adventure! Scroll down to start watching!

This new animated DC film is set in alternative Victorian Age Gotham City, where Batman battles the legendary Jack the Ripper! The animation style is reminiscent of Batman: The Animated Series, but don't be fooled by that because this is an R-Rated feature! DC's animated efforts are typically very well done, so I'm definitely looking forward to seeing this Elseworlds version of Batman come to life!

January is typically where movies are released quietly to die (though there have been exceptions to that rule over the years), and it seems like that is the case with this remake of George A. Romero's DAY OF THE DEAD. Set in a world overrun by the walking (and sometimes running) dead, a group of scientists and soldiers hunker down in a military bunker and try to find a cure. However, it seems that one of their test subjects (Bub V2.0?) has become dangerously intelligent, and soon all hell breaks loose! Though it looks like it'll have some great gore, this redo of DAY seems to entirely miss the point of its predecessor. If you've got a gift card, maybe give it a whirl next month!

When a volcanic eruption threatens all of the man-made dinosaurs still living on Isla Nublar (several years after the events of JURASSIC WORLD), an organization called the Dinosaur Protection Group mobilizes to rescue the island's (not-so) prehistoric denizens. But naturally things go awry, and eventually there's running and screaming as ash, soot, lava, fire, and brimstone, rains down upon humans and dinosaurs alike! Could this be the darkest chapter of the continued Jurassic Park universe?! I guess we'll find out next June!

A pair of psychopathic killers dressed as Santa and Mrs. Claus, commence a killing spree in the town of Woodridge, twelve days before Christmas! Can the authorities stop the cyclopean Santa and his Harley Quinn-esque sidekick before there's no one left in town to celebrate the holidays? This flick actually looks like it could be a fun new holiday horror flick, and I'm more than willing to give it a whirl when it comes out on DVD next Tuesday.


Well, that's it for now gang, but check back again soon for more trailers, Blu-ray announcements, movie news, and more as News Vault heads into its third year online!

Posted by The Vault Master at 4:44 AM

Labels: Batman: Gotham By Gaslight, Day of the Dead: Bloodline, Jurassic World: Fallen Kingdom, Once Upon a Time at Christmas, trailer round-up, trailers