On January 2nd, Escape from the CANNIBAL FARM! 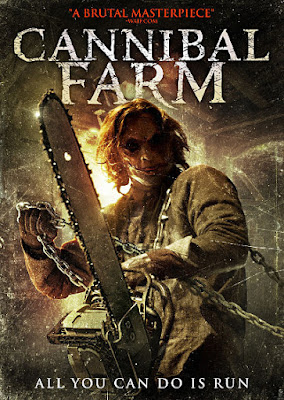 CANNIBAL FARM (aka ESCAPE FROM CANNIBAL FARM) is the UK's answer to THE TEXAS CHAINSAW MASSACRE. And while Hollywood struggles to figure out how to make Leatherface work for modern audiences, I think this flick's chainsaw-wielding maniac might hit a little closer to the mark.

The Harver family head out on an idyllic summer camping trip where they can bury past tensions and enjoy some family bonding. But when their camp is sabotaged by an unseen intruder in the night, they head to the nearby creepy old farm desperate for help, where vengeful farmer Hunt Hansen and his hideously deformed son aren't farming animals...


Scope out the stills and trailer below for a closer look at CANNIBAL FARM!
Click on the images to enlarge!

Posted by The Vault Master at 8:37 PM