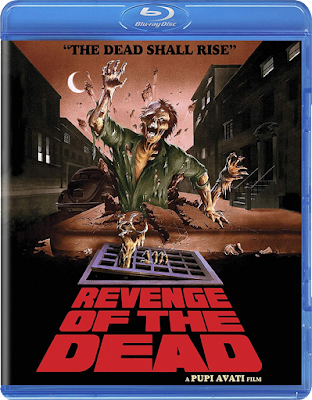 There's two things you need to know about REVENGE OF THE DEAD Vault Dwellers. First off, the title and the cover art are terribly misleading. While this film does indeed deal with people returning from the dead, no rotting corpses burst forth from the streets and sewers as pictured.

With that info out of the way, let's take a closer look at Code Red's new REVENGE OF THE DEAD Blu-ray!

Synopsis: Stefano, a young journalist, buys a used typewriter and accidentally sees that some text is still readable on the ribbon. He manages to reconstruct the story of a scientist, Paolo Zeder, who in the 1950's discovered that some types of terrain have the power to revive the dead that are buried in them. Stefano's investigations bring him in contact with a group of renegade scientists that are still making experiments to prove Zeder's theories.

Extras:
REVENGE OF THE DEAD is now available wherever Blu-ray discs are sold and costs between $16 - $25. If you're a fan of this film, or just looking for something a bit different in the realm of Italian Horror, pick up a copy of this Blu-ray now from AMAZON, BULLMOOSE, DIABOLIK DVD, or directly from KINO LORBER!