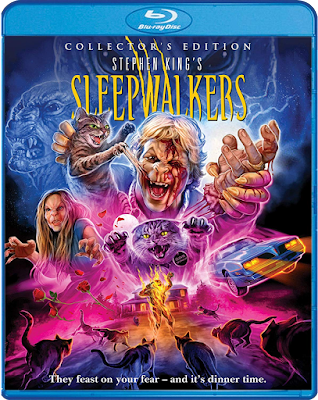 All I can think when I stare at the cover for SLEEPWALKERS is "this movie got a Collector's Edition Blu-ray and GRAVEYARD SHIFT still languishes in DVD Hell?!" I first saw this movie when it premiered on VHS in 1996, and I recall not being all that impressed with it, so naturally I was kind of surprised that it got so much TLC from Scream Factory. But then again, I haven't seen SLEEPWALKERS in over twenty years so maybe I missed out on what makes this particular movie worthy of a Collector's Edition? I'll guess I'll find out sometime in the near future!

Synopsis: Brian Krause (Charmed) and Alice Krige (GHOST STORY) star in this terrifying tale of modern-day vampires who move from small town to small town to prey on virtuous young women. Imperceptibly inhuman to everyone except for felines, these vicious shape-shifters have their eyes on a new victim: Mädchen Amick (Twin Peaks) is Tanya, the sexually curious virgin who falls for Charles, the new boy in school (Krause).

Mutating at will from golden boy to savage monster, Charles stalks Tanya to feed his seductive mother. As the tension mounts (and the casualties pile up), the town's tabbies gather for a final, chilling showdown with the monsters in their midst – and we all know it's not nice to hurt people's felines.

Extras:
Scream Factory's Collector's Edition Blu-ray of Stephen King's SLEEPWALKERS is now available wherever discs are sold, and should cost between $29 - $35! If you're a fan of this film, or just a completionist that must have any and all Stephen King-related films in your collection, pick up a copy now from AMAZON, BULLMOOSE, DIABOLIK DVD, or directly from SHOUT! FACTORY (which will also net you a poster featuring the new artwork)!