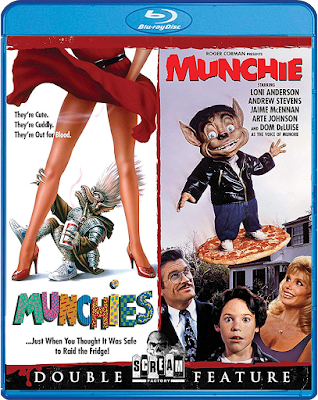 I recall adoring MUNCHIES when I was kid, but I'll readily admit that this GREMLINS rip-off hasn't aged all that well. MUNCHIE I am less familiar with, but I know its sequel MUNCHIE STRIKES BACK pretty well. This is definitely a nostalgia-driven double feature Vault Dwellers, and I only recommend it if you have kids, are familiar with these films and want to revisit them, or are continuing the insanely impossible quest of owning every Scream Factory title!

MUNCHIES Synopsis: Archeologist Simon Watterman (Harvey Korman - BLAZING SADDLES, HISTORY OF THE WORLD PART I) discovers the Munchies while on an expedition in Peru. But Simon's evil twin, food entrepreneur Cecil Watterman (also Korman), won't let him enjoy his achievement. The snack food tycoon tries to abduct the Munchies to destroy his brother's career and take over his property. These junk food junkies prove to be too much to handle as they begin to menace the residents of a small town in any way they can. Move over ghoulies, ghosties and things that go bump in the night! The Munchies are here and they are bringing the fun with them!

MUNCHIE Synopsis: No friends. The new school sucks. And Mom (Loni Anderson) is in love with a sleazy lawyer (Andrew Stevens - THE TERROR WITHIN, 10 TO MIDNIGHT). Pretty bleak. That's how life looks to ten-year-old Gage (Jaime McEnnan - REMOTE CONTROL) when suddenly, into his world pops the magical Munchie (Dom DeLuise - CANNONBALL RUN, SPACEBALLS). Munchie is the ever-hungry and hilarious mysterious creature from another world who delivers flying pizzas and brings on the parties! With the help of Munchie and loony Professor Cruikshank (Arte Johnson), Gage evens the score on his school's bullies as well as his mom's boyfriend and has the greatest summer ever!


Scream Factory's double feature of MUNCHIES and MUNCHIE is now available and costs between $24 - $25! Honestly I want this release but even I'm hard-pressed to spend that much, so here's hoping for a flash sale later on down the road! But if you can't contain your excitement and simply must have this double feature, order one now from AMAZON, BULLMOOSE, DIABOLIK DVD, or directly from SHOUT! FACTORY.